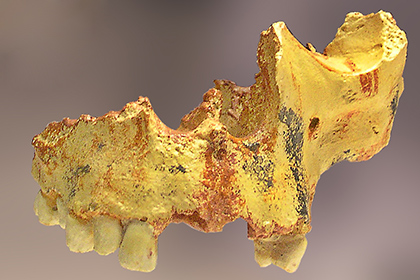 The ancient people living 1,2 million years ago didn’t use fire and ate crude meat. It was found out by archeologists from the York university who studied the dental plaque taken from remains of one of types of hominids of a pleystotsenovy era. Scientists provided the conclusions in article published in the German magazine Naturwissenschaften.

Homo antecessor fossils (the descendant of the person of orthograde Homo erectus) were found by researchers in 2007 in Sim del Elefante’s cave (“An elephant hole”) located near the ridge Atapuerca in the north of Spain. They are provided by the lower jaw and several remained teeth. Near a human bone remains of small rodents and animals of family of marten were also found.

Archeologists scraped off a raid from teeth and analysed the mikrofossiliya got from it — the smallest fossil remains. They included traces of animal fabric, a starch granule, pine pollen and fragments of insects. Scientists didn’t find out signs that the food which was eaten by ancestors was prepared on a fire. Could specify particles of charcoal or traces of heat treatment the last.

Scientists came to a conclusion that when ancient people left Africa, migrating to Europe, they weren’t able to use fire yet. The technology of heat treatment of food, according to researchers, appeared not 1,2 million years ago, and later. At the same time the age of the earliest certificates of cultivation of fires reaches 800 thousand years. They were found in depth of the Spanish cave of Kova-negra where Neanderthal men lived, and represent stones and instruments of labor with heating traces, and also the burned bones.

It agrees modern to scientific representations, cooking on fire allowed people to spend less energy for digestion, redistributing it for benefit of a brain.