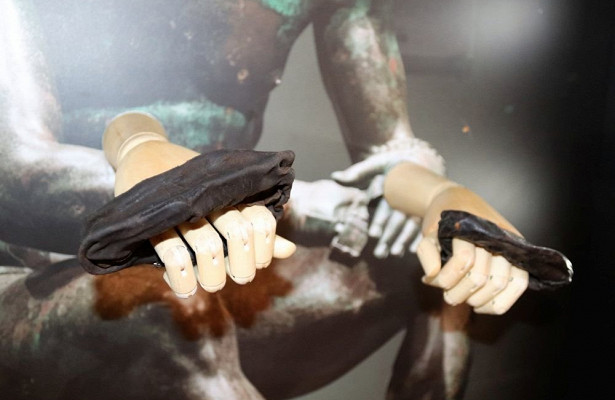 In the museum of the ancient Roman fort Vindoland, located in the north of England, since February 20, “boxing gloves” of 1900 years are on display. This is reported on the website of the research project Vindolanda Trust.

Two gloves were discovered as early as in 2017 during excavations of the ancient Roman fort Vindoland, which was part of the military fortifications – the shaft of Adrian. However, only now archaeologists have told about the find. It is the first of its kind. Earlier “boxing gloves” of ancient Romans scientists saw only on ceramics and other images.

They differ markedly from modern ones. Gloves were designed to fit tightly around the wrist, protecting the joints from damage. They were made of hard leather, they differ in size and were not one pair. In addition, one of them has remained almost perfect, scientists note, and the second has noticeable signs of wear and repair. It is established that they were made around AD 120.

Along with gloves, hundreds of other artifacts were found, including well-preserved scabbards and swords, as well as tablets with texts. It is believed that the fort was built around 85 years. Probably, he was subjected to a sudden attack and was left in a hurry garrison.

Excavations have been going on for many years. Marshy soil well preserved artifacts. So, last year a cavalry barracks was excavated. In it, gloves were found, presumably used for training and sports battles.