Ancient sarcophagus of “the great caretaker of thrones” unearthed in Egypt 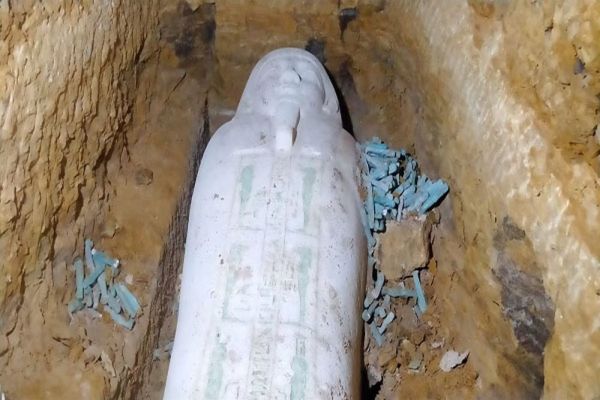 In Egypt, an archaeological mission of the Ministry of Antiquities, while excavating in the province of Al Minya, discovered a deep burial well, at the bottom of which there was a well-preserved stone sarcophagus of a prominent royal dignitary.

The opening is reported on the official website of the Egyptian Ministry of Antiquities. A research mission made a discovery at the Al Garafa site in Al Minya governorate. The excavation is headed by the famous Egyptologist, Dr. Mustafa Vaziri, by the way, the secretary general of the Supreme Council for Antiquities.

His team discovered a deep burial well. It was littered with construction debris. Having cleared this debris, archaeologists found a stone sarcophagus, which was located at the bottom of the well, at a depth of about five meters. Scientists note the excellent preservation of this coffin.

Several Ushabti figurines were found next to him. These are sculptures traditional for Ancient Egypt that were used for ritual purposes. They were placed in the grave so that they would replace the deceased while working in the afterlife fields of Osiris. In addition, ushabti was used to transfer various spells to the afterlife.

However, the sarcophagus itself turned out to be much more interesting. It was skillfully crafted from limestone. Its lid is covered with ritual images and hieroglyphs. In particular, it contains images of the four children of the god Horus.

According to Dr. Waziri, preliminary research has shown that the remains of a man named Jehuti Umm Hoteb are buried in the sarcophagus. He lived during the reign of the XXVI dynasty of the pharaohs, which is also called the Sais dynasty (about 685-525 BC). It was the last of the local dynasties to rule Egypt before the Persian conquest.

Scientists have established that this man held the position of “Great Khum, caretaker of thrones”, that is, he was a high-ranking priest of the god Dzhehuti and an approximate of the pharaoh. In addition, he was the son of the “defender of the East”, whose coffin was discovered by an archaeological mission during the first season of field work in El Minya in 2018.

The ministry noted that the excavations are still continuing, and it is possible that new “treasures” will be found when clearing the rubble of construction waste accumulated for millennia.

For three years now, the archaeological site of Al-Garafa has brought important discoveries. Previously, many family tombs belonging to the high priests of the god Jehuti and high dignitaries were excavated here. Also, 19 simpler burials were found here, containing 70 stone sarcophagi of various sizes and shapes and a large number of ritual objects.