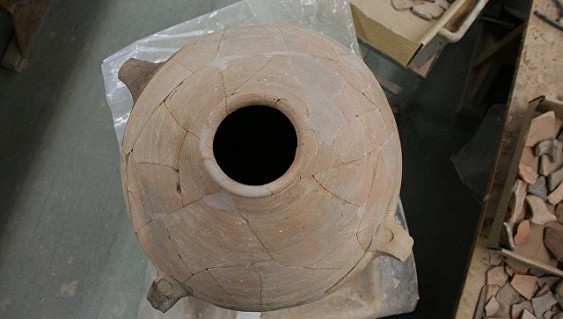 Traces of Earth’s magnetic field, seared in the clay vessels in biblical times, revealed a sudden episodes of rising and falling of his power, the traces of which scientists have not found in the rocks.

The direction of the compass needle is not a constant for our planet. Periodically, about once in 450 thousand or a million years, the North and South magnetic pole swap places, traces of what scientists have discovered in the structure of ancient clay and volcanic rock. For example, about 40 thousand years ago, the North needle of a compass would point to the South pole and South to North.

Israeli archaeologists under the direction of Erez Ben-Yosef (Erez Ben-Yosef) from tel Aviv University found that not all of these changes are reflected in the structure of the natural deposits of rocks, studying pottery found recently in drevneevreyskom Ramat Rachel, whose ruins began to raskupayutsya scientists back in the 60’s.

This middle Eastern metropolis was one of the most active centres of trade in Judah in 8-2 centuries BC and in some times of its existence, it competed and even surpassed Jerusalem in its effect. Recently scientists have found there are many clay vessels and utensils with local seals of kings and the exact dates of manufacture that relate to the biblical periods of the existence of Ramat Rachel, which allowed geologists to accurately study changes of the magnetic field of the Earth in the past.

How they managed to do it? Many species of the Earth, including clay, contain iron atoms, and granules containing rocks, which contain information about where it was rotated magnetic field of the planet and what power it possessed at the time of their formation. If the clay is heated to a certain temperature, seared in her information about the magnetic field is erased and overwritten by the data on the current state of the field.

Because of this, if you know the date of manufacture of the vessel, it’s easy to see how looked the Earth’s magnetic field in the distant past. Following this idea, Ben-Yosef and his colleagues separated the small fragments of clay vessels from various periods of the Ramat Rachel, measured their magnetization and got a kind of geomagnetic chronicle, describing how changing the planet’s magnetic field from 8th to 2nd century BC.
To the great surprise of the scientists, these measurements are recorded with a very unexpected thing, which is not reflected in the data that were obtained in the study of the magnetization of natural clays and rocks in the same part of the Middle East.

In addition, the researchers further recorded episodes of a sharp drop in the strength of the magnetic field of the Earth in 730-701 years before our era, when just 30 years the field strength fell by 27%, as well as several other swings, the scope of which goes far beyond what the theory predicts.

Such discoveries, as scientists, do not change our understanding of how the Earth’s poles change places, like where and when it will happen next time in South Africa a few thousand years. On the other hand, such high-precision measurements will help geologists to improve predictions and understand how such changes could affect life on earth and civilization in the past.