Anesthesia does not only affect animals, but also plants 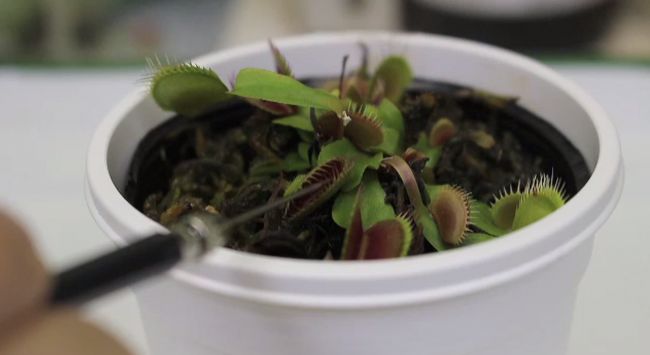 In 1846, a patient with a tumor around his neck decided to try something radical, perhaps even desperate: anesthesia. The inhalation of the ether gas before it went under the knife has paid off many times. Today, a surgical operation without anesthesia is simply impossible to imagine. This idea, however, was not new even in 1846. 28 years earlier, it was suggested by none other than Michael Faraday, who is also known today for his work on electromagnetic fields and the invention of the magic Faraday cage, which protects against lightning or other powerful surges of electricity.

Yet for a concept that is almost 200 years old, anesthesia remains almost a miracle. We still do not really understand how it works or why so many structurally unrelated chemicals – diethyl ether, chloroform, halothane, isoflurane or even an inert noble gas xenon – are equally well cut down by animals.

Even more striking, the same group of chemicals works not only on animals, but also on plants. To Venus, the flytrapper, as it turned out, is just as easy to sink a dream as the fly-fly fly above it.

That’s how the usual trap works: if you disturb the hairs twice on a venus flytrap for a short period of time, it will close. But after exposure to diethyl ether, the plant falls asleep.

The video of this action can be viewed on Scientific American.

Are you surprised? So do I. However, scientists have known for a long time that plants are prone to anesthesia in principle. Claude Bernard showed the sensitive plant Mimosa pudica asleep in 1878.

Much more surprising is the other: it turns out that not only plants and animals – any organism on the planet is subject to anesthesia. Bacteria, chloroplasts and even mitochondria inside our cells are all exposed to mysterious gases.

However, plants can offer a unique opportunity for experimentation. Not so long ago a group of scientists from Japan, Germany, the Czech Republic and Italy thought that studying plants can be key to solving the principles of anesthesia, not only for them, but for us. They published their first results in December in Annals of Botany.

First they showed that more plants are exposed to the effects of anesthesia than previously known. In addition to the Venus flytrap and Mimosa pudica, Cappuccino, whose sticky leaves twist around the insects that have entered them, and pea tendrils, which usually move slowly, also freeze when exposed to gases.

They also tried to apply a local anesthetic – lidocaine, which is familiar to you through the dental office – to the roots of a sensitive plant. This paralyzed the plant for five hours.

On the topic of the work of anesthesia there are two main schools of thought. The first claims that the anesthetics bind to a receptor. The receptor is a molecule with a pocket, the shape of which is ideal for a chemical anesthetic. By tying itself to this pocket, the anesthetic changes the form of the receptor, it all builds up in a cascade, leads to a slowing of movements and consciousness.

Many of the membrane proteins act as portals, controlling the flow of biochemical substances that lead into and out of the cell. In our case, the membrane maintains the electrical charge of the cell in accordance with the environment, blocking the movement of ions – small charged atoms or molecules – unless they pass through certain gates.

This function is vital for cells that transmit neural signals in animals, because the charge difference inside and outside the cell extends the action potentials. The action potential is an electrical impulse. Ion portals in the membrane quickly open and close, changing the charge like a beating heart.

In an animal, cells that generate action potentials are neurons, the smallest units of the nervous system. The action potential is transmitted along the axon – in fact, along the wire – the neuron in a wave caused by the closing and opening of ionic portals.

This will be the subject of our discussion on the topic of anesthesia, since although this triggers anesthesia, the end result is the loss of action potentials. When the anesthesia acts on the animal, the neural palpitations stop.

This suggests that bioelectricity and action potentials feed the movement of plants and animals in the same way. That two groups, separated by such a huge evolutionary abyss, have the same mechanisms.

Scientists also conducted experiments designed to test the hypothesis that anesthesia changes membranes. If you look closely at the root cells of the plant Arabidopsis (a laboratory rat of the plant world) under anesthesia, diethyl ether and lidocaine act on how the membranes move tiny balls – vesicles. Since many complex membrane components must work properly, so that the processing of vesicles works, scientists have suggested that anesthesia affects the functioning of cell membranes.

Other recent studies speak in support of this idea. One article even hinted that the action of the anesthetic can spread – but it’s quite surprising – on the electron spin in proteins contained in the membranes. Others suggested that the mechanism of anesthesia could include changing the thickness of the cell membrane or its mechanical properties, which in turn affects the function of the protein.

Anesthesia can even interact with the actions of proteins, combined into complexes called “lipid rafts”, drifting within the phospholipid sea. In this case, membrane proteins and vesicles will fail, which can lead to a short-circuit of action potentials and immerse the body in sleep.

Perhaps the most convincing proof of the membrane hypothesis is the strangest of them, which has been known for a long time: putting people, animals and even plants under high pressure cancels the effects of anesthesia. Imagine? Perhaps the pressure stabilizes the membranes in a way that makes them impenetrable for anesthesia.

The abolition of anesthesia under high pressure, the surprising fact that all life forms undergo anesthesia, as well as a change in membrane function in plant root cells, indicate that the membrane is the main culprit in the celebration of anesthesia. This is the opinion of the proponents of this hypothesis.

But if this hypothesis is correct, it is at variance with the generally accepted scientific consensus that prefers the receptor hypothesis. And if the receptors are the true target for anesthetics, then plants have similarities to humans. In plants, there are glutamate and GABA receptors, the main regulators of the CNS in animals, which are referred to as possible targets for anesthetics.

Plants are believed by scientists to be able to solve this dilemma, especially because now we know that they suffer from the same loss of action potentials that we are. Our green still friends can be an ideal object for searching for the “elusive mechanism underlying anesthesia and the phenomenon of consciousness,” scientists say.

Does it mean that plants can have consciousness? We will not run ahead.