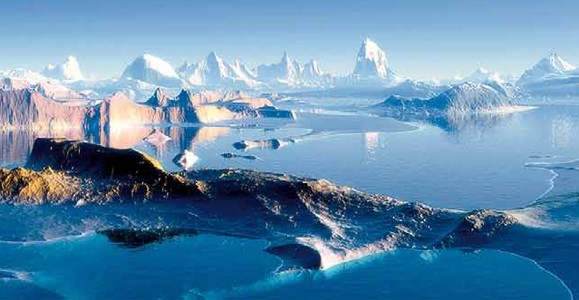 The remains of ancient plankton helped scientists to find out that the main destroyer of Antarctic ice is warm deep currents that wash away the base of the sea part of its ice and cause it to split into parts, according to an article published in the journal Nature.

“The current reduction in ice areas in the west of the Antarctic is a consequence of the fact that the pattern of wind movement at its shores changed in the 1940s, as a result of which warm deep currents began to wash the shelf and underwater part of its ice again, which is the cause of those ice losses, Which we have seen in the past few decades, “says James Smith of the British Antarctic Expedition.

Every year, the ice shield of Antarctica loses up to 2.8 thousand cubic kilometers of ice, and in the last decade the ice cover is shrinking faster and faster. For a long time it was thought that this was due to the accelerated formation of icebergs, but American climatologists in June 2013 found that slightly more than half of the volume of disappeared ice was melted by warm currents that washed the underwater part of the Antarctic ice sheet through the original river canals at the foot of the glaciers .

Smith and his colleagues confirmed that this is actually so. These currents have already caused a sharp reduction of the ice cap of Antarctica about 10 thousand years ago, the researchers found, having studied the deposits of plankton shells formed on the seabed of Amundsen for several tens of thousands of years.

Fluctuations in water temperature, as scientists explain, strongly influence the chemical composition of the shell of some algae and zooplankton, which makes it possible to use their deposits as a kind of “climatic record”. It allows you to find out not only how the temperature of the waters of the seas and oceans in the distant past has changed, but also to understand in which direction and how the currents moved.

Having collected samples of similar fossils from different parts of the Amundsen Sea, scientists compared their contents and found that the Antarctic experienced a sharp reduction in the area of ​​ice approximately 10 thousand years ago, comparable to what is happening now.

At that time, as shown by the analysis of the isotopic composition of the plankton shells, the ice of the Antarctic began to be washed by warm enough deep currents, which were nailed to shore thanks to the “circumnavigation” of the western winds.

These streams of water undermined the foundation of the ice sheet of the western Antarctic, as a result of which large icebergs began to chip away and its area began to drastically decline. Ice, as shown by measurements, disappeared off the coast of the Antarctic almost instantly, which on the whole repeats what is happening now off the coast of the southern continent.

Approximately 7.5 thousand years ago, this process stopped when the winds, scientists believe, shifted to the north and stopped sending warm water to the foothills of the glaciers. After that the Antarctic ice cover began to recover and reached the modern border.

The same process as the excavations of Smith and his colleagues show, resumed in the 1940s, and its existence explains why the Antarctic is melting today at an unusually high rate. Why warm currents returned to the shores of Antarctica, scientists do not yet know, but suggest that the reason for this is the warming of the Pacific Ocean and the increase in the El Niño phenomenon caused by the increase in the content of greenhouse gases in the atmosphere.