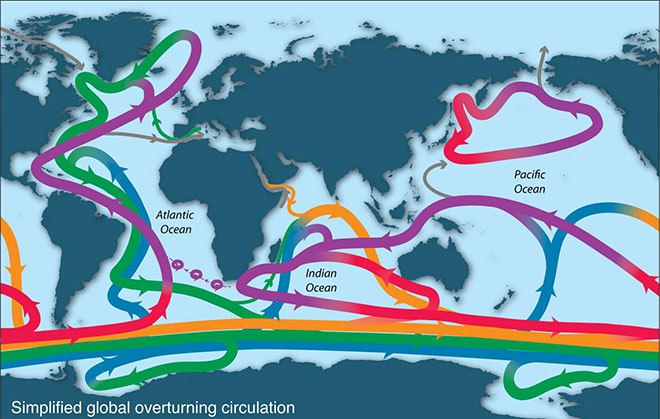 Antarctic sea ice is constantly in motion. Strong winds will carry it away from the shore into the open ocean. As shown by a new study the movement of ice is of great importance for the global circulation of ocean waters.

The researchers used a computer model to combine the results of multiple observations of ocean and ice, collected over six years from the coast of Antarctica, and for the first time to determine the effect of sea ice, glaciers, atmospheric precipitation and warming on the ocean “tipping” circulation.

Due to the overturning circulation of water and nutrients from the depths are delivered to the surface, while surface water is transferred down. This helps to distribute the heat and keep carbon dioxide as it passes through the World’s oceans, making the process an important factor in the global climate system. Scientists have discovered that fresh water plays a major role in changing the density of sea water, which causes circulation. The melting of floating sea ice contributes 10 times more education fresh water than the melting of land glaciers. An integral part of the process is the seasonal “migration” of ice, largely due to the wind. If the sea ice melted in the same place, where and formed, it would exclude the effect of circulation.

“In the absence of wind and therefore movement of sea ice from Antarctica is likely to force “tilting” of the circulation would be reduced,” — said the study’s lead author, oceanographer from the Observatory Lamont-Doherty Earth at Columbia University Ryan Abernathy.

In a study published this week in the journal Nature Geoscience, used a complex approach for a complex study of what’s going on down under the ice where it is difficult to make direct observations. This provided a new understanding of the basic physics of the ocean and can be crucial for answering questions about the future of climate change, for example, such as the loss of sea ice or changes in wind direction may affect global ocean circulation.

“Everyone is interested in the amount of sea ice increasing or decreasing? We look at the problem from another point of view: what does sea ice with ocean underneath?”, explained Abernathy.

When sea ice is formed every winter at the edges of Antarctica, salt in ocean water does not freeze, and remains in it. This makes the water near the coast and saltier and therefore more dense than the water farther from the shore. Dense water goes down, thus pushing less dense water upward, which leads to circulation. At the same time, the ice that melts in the open ocean, increases the amount of less dense freshwater more dense salty plunging down.

Scientists have known that changes in the density of water, particularly immersion in cool salt water contribute to the deep circulation of the ocean. The deep cold branch of the “conveyor belt” oceanic “conveyor belt” moves the cold Antarctic water northward along the ocean floor. But it was less clear what role the salinity of the water can play in a vertical circulation that transports the water from the middle depths to the surface in the southern ocean and finally delivers it to the tropics.

Using the method of analysis called the water-mass transformation, the scientists were able to quantify the rate at which freezing and melting of ice contribute to vertical circulation, making the water near the coast is more dense, and the water in the open ocean easier.

Oceanic circulation is of key importance for the climate system because it distributes heat and helps to store carbon dioxide in the deep ocean.

Scientists believe that changes in ocean circulation in the past influenced climate, including glacial periods. To understand how circulation may change today, they plan to carefully study how changing salinity and wind speed in the past.

“We have long known that the freezing Antarctic sea ice in winter is responsible for the formation of the deepest water in the oceans, but this study shows that the melting of ice in summer, also regulates the formation of water in the surface layers. This progress became possible only thanks to the computer models used in this study, which took into account the millions of ocean observations”.