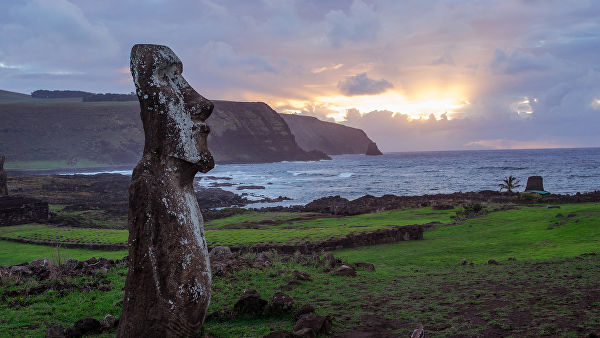 Mysterious idols and their “pedestals” were built on the shores of Easter Island, not only for the veneration of their ancestors, but also as a kind of “pointers” to the sources of fresh water. This conclusion was made by scientists who published an article in the journal PLoS One.

“Many colleagues who studied Easter Island often complained that there were almost no sources of fresh water in its territory. When we began to study its hydrology, we noticed that almost all the idols were located at those points where springs and keys come to the surface It’s amazing that nobody has noticed this before, “said Carl Lipo, an anthropologist at Binghamton University (USA).

Easter Island is one of the most mysterious places on Earth, where about two thousand years ago there was a bizarre civilization of the Polynesians Rapanui, which left behind numerous traces in the form of giant idols, moai. They, as scientists believe today, are deified figures of ancestors and relatives of the ancient inhabitants of the island.

This civilization actually disappeared from Easter Island before the arrival of the Europeans there. The reasons for this are two things – the depletion of resources as a result of the predatory destruction of forests and animals by Polynesians and the related war between different Aboriginal tribes.

Around the time of the arrival of the first travelers to the island, these wars led to the almost complete disappearance of the Moai culture and its replacement with the more militant “bird-man” culture. Finally, the remnants of civilization on Easter Island were destroyed in the middle of the XIX century, when slave traders occupied it. Due to the destruction of culture, the unique writing system of Rapanui has not yet been deciphered by scientists.

The complete disappearance of the culture of moai and its native speakers does not allow archeologists to solve one of the most interesting secrets of this island – why moai and pedestals for them, which scientists today call the word “ahu”, were built only at specific points on the coast of this piece of land in the Pacific Ocean .

Lipo and his colleagues found an unexpected answer to this question by composing unique resource maps of the island, on which scientists tried to point out all of its important natural resources, including sources of fish, water, and areas of fertile soil.

“Initially, the connection between water and moai was not very obvious. If you look at the coast of Easter Island, it is difficult to assume that these statues can be associated with fresh water penetrating to the surface of the Earth during low tides. On the other hand, the analysis of the position of all idols clearly showed that there are springs at all points where they were built, even in the depths of the island, and where there are no springs, there is no drinking water, ”continues the anthropologist.

Such a connection between water and idols, as Lipo and his colleagues believe, suggests that access to it played a very important, in fact, sacred role in the life of the inhabitants of Easter Island. In addition, this, according to the anthropologist, testifies in favor of his theory that the tribes of the Polynesians did not fight with each other, but exchanged resources and built the idols together.