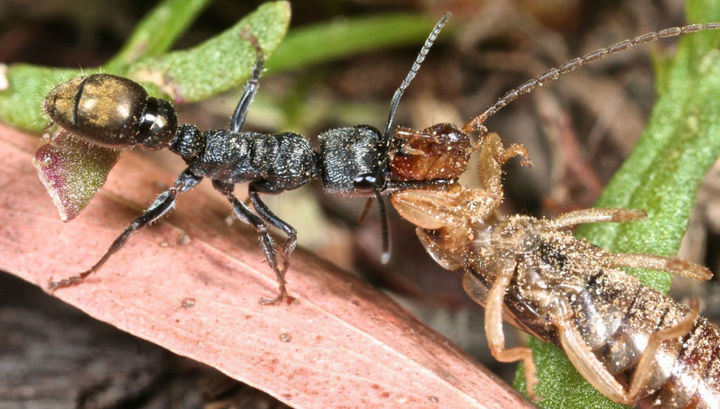 The industrious ants had been the subject of many studies through which scientists, for example, learned how they communicate or build nests. Recently entomologists found that the navigational abilities of ants is much more complicated than assumed.

Researchers from the University of Edinburgh have shown how the insects (which go backwards when carrying something heavy) use sun position and visual memory about the environment, in order to return home.

Experts in the new study showed that ants, walking backwards, occasionally looking at the surroundings behind him. The thus obtained information helps them to build the desired trajectory, guided by the position of the sun. And insects can find their way to the nest.

The researchers studied a colony of desert ants of the species Myrmecia piliventris in Seville (Spain), to understand how insects move when transporting goods (mostly food) of different sizes.

Insects move in the normal way when the bear small pieces of food, but when you carry heavy items in their homes they go backwards.

In the study, entomologists erecting small barriers to ants there was only one way to their nest. Then they gave them either a small or a large piece of biscuit and watched as the insects came back home.

Previous studies have shown that ants, going before, has found its home with the fact that compared what he saw in front of him with his visual memories of the route. The scientists found that the ants, backing away, using the position of the sun in the sky to search for the right direction to home.

This became clear when the researchers used a mirror to change the perception of insects the position of the source of bright light. In this case, the ants lost their way.

In addition, the Scottish entomologists have found out to make sure they are on the right track, ants, backing away, constantly ostanavlivalas, dropped his load and turned around. They do this in order to compare their visual memories and to understand is not lost if the planned route, suggested the researchers.

Our main conclusion is that ants are able to separate the direction of movement of the orientation of their body in space, — says one of the study’s authors Dr Antoine Wystrach from the University of Edinburgh.

The discovery suggests that ants are able to understand spatial relationships in the external world, and not only in relation to itself.

Future studies will also help scientists identify linkages between different regions in the brain of ants that allow them to use and combine different types of navigation.