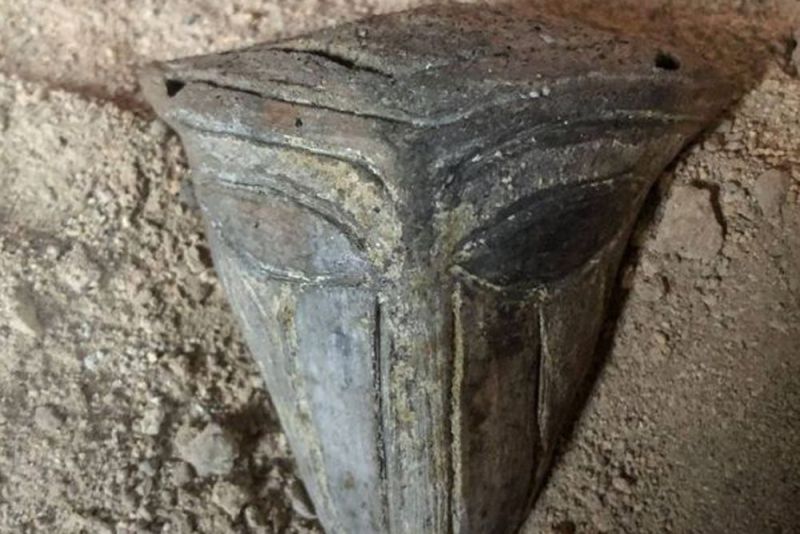 In Bulgaria, archaeologists during excavations at the site of an ancient settlement discovered a prehistoric mask that combines the features of man and animal. She is surprisingly similar to the image of the “alien” that science fiction created for us.

According to Archeology in Bulgaria, a prehistoric clay mask depicting the face of some mythical creature without a mouth dates back to the 5th millennium BC. It was found by an archaeological team led by Professor Vasily Nikolov in the prehistoric settlement of Salt pit near the settlement of Provadia in northeastern Bulgaria.

The local media, which told about this amazing discovery, amicably compared this artifact with “an alien in a space suit.” Indeed, visually, this bizarre prehistoric mask, which combines the features of humans and animals, resembles an “alien” from a science fiction movie.

The settlement of Provadia, also dating back to the 5th millennium BC, is known as the most ancient city in Europe. According to scientists, the found artifact dates back to the late Eneolithic period, that is, it was created around 4000 BC. Experts have already called it one of the most impressive finds made during the latest excavations in the Salt pit settlement. However, this mask would hardly have received so much attention if it were not for its intriguing appearance.

Judging by the description presented, the artifact has an almost regular triangular shape. Its front side protrudes forward in relief, and the back is, as it were, pressed inward and is rather roughly processed. Both corners of the top of this prehistoric mask have short projections. According to archaeologists, these may be “stylized ears”.

Small holes were found in the “ears”. Perhaps a thread was threaded through them to wear a mask on the face. However, there is also an assumption that it was not a face mask, but a figurine or amulet, which was worn on the chest and which was associated with the cult of the Sun. Archaeologists note that the facial features depicted on the artifact were clearly carved, and some areas were polished.

“The face has eyebrows, a stylized nose and elliptical eyes,” the researchers write. “The artifact was most likely a status symbol hanging on the chest of a person worthy of it.”

The ancient master clearly focused on the eyes, giving them an unusual shape and large size. And the vertical polished stripes below them, according to archaeologists, “speak much more than a missing mouth.”

“Looking in them [the eyes of a prehistoric mask], you feel strength, superiority, wisdom,” the researchers say. “It’s curious that if you look at this image from a different angle, you can see traces of different emotions. Perhaps it was not the desired effect, but, rather, a perception through the prism of a modern view. However, this “mask” of the late Eneolithic era is just another pearl in the crown of finds found in the oldest urban and salt center on the European continent. ”

We add that Provadia was a thriving city. The locals became rich by mining and trading rock salt with even the most remote regions for about four millennia.