Archaeologists found a mysterious sculpture of the biblical king 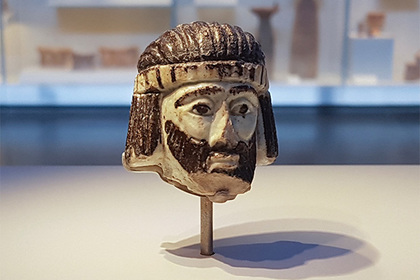 Israeli archaeologists have discovered a sculpture of the head of an unknown king, whose age reaches three thousand years.

The artifact was found in 2017 during excavations at the Abel Beit Maaka site, located south of the border of Israel and Lebanon, near the city of Metula. In the IX century BC, this place was located between Aramaic Damascus, the Phoenician city of Sur and the Israeli kingdom with the capital of Shomron. The sculpture in height of five centimeters is made of faience, which was widely used in ancient Egypt and the Middle East as a material for ornaments.

According to scientists, the artifact depicts the Middle Eastern Semitic king, as indicated by the characteristic hairstyle: the hair is combed back and held with a diadem, and the ears are covered with thick curls. It is known that the ancient Egyptians likewise represented people living in the neighborhood in the East. However, the researchers do not know exactly which king is imprinted in the sculpture, suggesting that this may be one of the five rulers – Bar Hadad or Hazal, that ruled in Damascus, Ahab or Yegu (Israel) or Itobaal (Sur).

It is known that the Book of Kings mentions the attack of Bar Hadad on Abel Beit Maaka, when the Aramaic king made a campaign against the Israeli kingdom.

According to scientists, the head can only be a part of the statue. Archaeologists are going to resume excavations this month to find new artifacts.