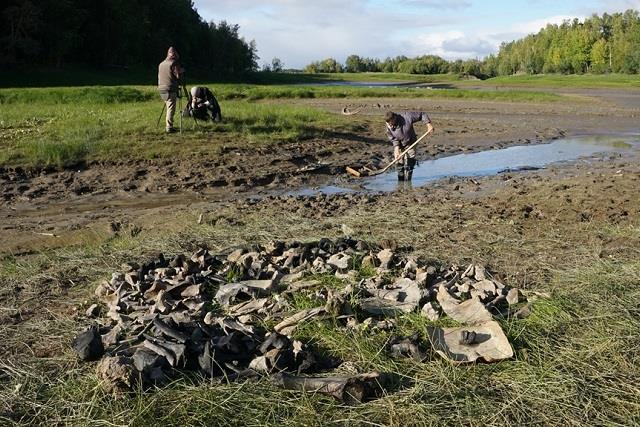 A joint expedition of scientists from the Institute of Archeology and Ethnography of the SB RAS (Novosibirsk), specialists of the geological and geographical faculty of the Tomsk State University and employees of the Museum of Nature and Man (Khanty-Mansiysk) discovered the most northern park of an ancient man in Western Siberia.

The find was made in the north of the Khanty-Mansiysk Autonomous Okrug in the Tyumen region. Until recently, the most northern paleolithic site of Western Siberia was Lugovskoye – one of the largest sites of the remains of mammoth fauna in North Asia, located 25 kilometers west of Khanty-Mansiysk.

World fame brought to him a sensational discovery, made in September 2002, – a mammoth’s vertebra, pierced by a throwing cannon of an ancient man. There are no similar finds in Asia, in other parts of the world only a few similar exhibits are known.

This time the traces of the presence of an ancient man were discovered almost 300 kilometers to the north – next to the remains of the ancient Ugric settlement of Komudwana, from which there was only a name. In the river deposits of the river Magnya (tributary of the Ob), two bony layers with remains of mammoths, woolly rhinos, bison and horses have been identified. But the most valuable find was stone artifacts, found in pits located on the nearest terrace. Quartz flakes can be used by ancient people as tools for cutting carcasses of animals or for processing solid materials – bones and tusks.

“The artifacts themselves are quite ordinary. Unusually, in what place they are found. Now this is the northernmost Paleolithic location in Western Siberia, where real traces of human presence are present. His age is not less than 10 thousand years. Whence came the ancient people, one can only guess. For example, they could migrate from the foothills of the Urals, “said Sergei Leshchinsky, head of the laboratory of the continental ecosystems of the Mesozoic and Cenozoic GGF TSU, commented on the finds.

As the scientist notes, the area where the excavations were conducted is called in the scientific environment Belogorsky “mainland”, it is very interesting from the geological point of view. Here there are a number of signs of continental glaciation, which in the middle of the Pleistocene (about 200-260 thousand years ago) covered the entire north of Siberia. Along the banks of the Ob are still clearly visible frost-bending wedges and rock blocks, which hundreds of thousands of years ago brought here giant glaciers.

Scientists intend to return to the Khanty-Mansiysk District in the next season of archaeological excavations to move farther north in search of traces of the ancestors of modern man. Perhaps there will be new details that will allow you to find out how long a Paleolithic man came to the territory of Western Siberia, to find out what the ancient hunters did in the mammoth cemeteries, and finally, to try to find the answer to one of the most important mysteries – why in Siberia in those places where there are obvious signs of the dwelling of ancient people, their remains are extremely rare.