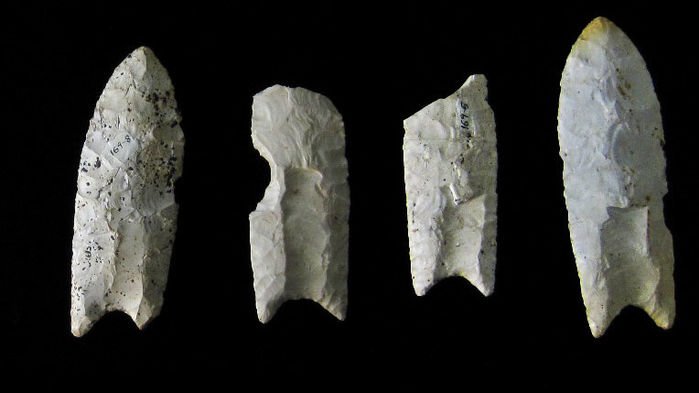 Archaeologists have found 11 copies in Texas that were used by people 13,500 – 15,500 years ago. These are the most ancient artifacts ever found in America.

For 10 years, a group of archaeologists carefully excavated layer by layer ancient stone tools near Texas, trying to find items belonging to the first people who arrived in America. Now they managed to find spears that are about 15,000 years old. It is also important that they were under the Clovis culture tools, which proves the fact that Clovis people were not the first to come to America, as archaeologists considered for a long time.

“These studies are pushing people toward a new understanding of the world,” said Todd Bray, an archaeologist at the California Academy of Sciences in San Francisco, who was not involved in the work. Researchers believe that they will be able to use certain characteristics of the style of the instrument created by the mysterious first Americans to track the progress of people in North and South America.

The place where the tools were found is located about 20 kilometers northwest of Austin, has year-round fresh water, making it an ideal place to settle people, ”says Michael Waters, an archaeologist at Texas A & M University College Station. excavated there from 2006 to 2016. Stone tools in the area suggest that people have lived there for more than 10,000 years. Among the remnants are Clovis’s spears, used to hunt mammoths and other megafauna representatives about 13,000 years ago.

The lugs of the Clovis culture are distinguished from others by the presence of vertical grooves on both sides of their base. For many years, archaeologists believed that the large hunters who used them were the first to enter America, having made their way from Alaska through the ice corridor between the ice sheets of western Canada about 13,500 years ago. But in 1997, archaeologists confirmed that Monte Verde – a site in Chile – was inhabited for at least 14,500 years – that is, people lived there before the corridor was free of ice and became a useful route.

Then archaeologists had to change the concept. Again they did not know when and how the first Americans appeared. Worse, they did not have the ability to consistently identify stone tools before the Clovis era, because, unlike the easily recognizable Clovis tips, they did not have a single style.

Now, Waters may have discovered this style. The tips found are for the most part smaller than the Clovis tips, they have no vertical grooves and are sharpened towards the short stem. The 11 tips found are in the sediment layer about 15 centimeters lower than the earliest Clovis items in the area, which means they are almost certainly older. But how much?

The wet environment of the stream made radiocarbon dating impossible, so Waters used a technique called optically stimulated luminescence, which measures when the particles of quartz in the buried sediments were last exposed to sunlight. Waters measurements have shown that the draft around the tips found is from 13,500 to 15,500 years. If their creators arrived in Texas so early, then the Pacific Coast was the most likely route for them. Then, after settling here, they could invent or adopt Clovis technology.

The findings may motivate archaeologists to continue the search for similar tips in Texas and other parts of America. Similar tips have already been seen in the area of ​​the prehistoric Pacific Territory, and some archaeologists wondered if this could be evidence of coastal migration to America. Waters discovery does not fully explain this case, but makes the question even more intriguing.