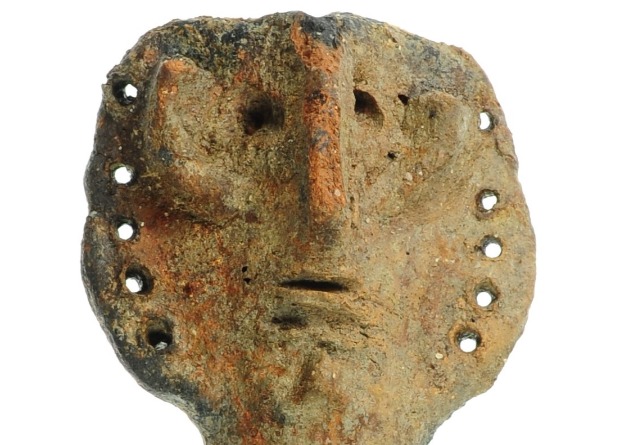 German archaeologists have discovered a number of artifacts from the 8th-6th centuries BC during excavations of a prehistoric ditch in Bavaria that belong to the Hallstatt culture. Among them was a small clay figurine with an anthropomorphic face, apparently depicting the goddess of water. The researchers suggested that the figurine could be used as a ritual offering. This was reported in a press release from the Bavarian Monument Protection Authority.

In the 8th-5th centuries BC, the Hallstatt archaeological culture of the early Iron Age existed in vast territories from Central Europe to the Balkans, apparently associated with the Proto-Celtic tribes. At the same time, a number of researchers believe that it arose much earlier – around 1200 BC, that is, in the Late Bronze Age. It got its name from a burial ground excavated in the vicinity of the village of Hallstatt in Upper Austria, where in the middle of the century before last, researchers discovered about two thousand ancient burials. Now it is a monument included in the UNESCO World Heritage List, which includes not only the burial complex, but salt mining sites.

The economy of the tribes of the Hallstatt culture was based on plow farming and subsidiary animal husbandry. Bronze and iron metallurgy, as well as pottery, jewelry and art were at a high level. The Hallstatt settlements were mostly small settlements with street layout, wooden post houses or semi-dugouts, as well as small fortifications in the form of earthen ramparts (less often, larger settlements with ramparts and ditches). A striking feature of this culture is the manufacture of such items as antenna swords, bronze helmets with crests and wide brim, zoomorphic brooches and bronze utensils.

German archaeologists carried out security and rescue excavations that preceded the construction of a highway bypassing the commune of Menchstockheim, located in Bavaria. While exploring a prehistoric ditch that could have been used by the ancient inhabitants of the surrounding settlement to collect water, they discovered a small clay figurine. In addition to it, the scientists had at their disposal pieces of glass, fragments of ceramics, bone tools and a clay stamp. The latter, judging by its surface, was used to decorate organic materials. Ceramic artifacts have led archaeologists to conclude that these items were deliberately placed in the ditch. Judging by the surviving fragments of vessels, they date back to the 8th-6th centuries BC and belong to the Hallstatt culture.

The found figurine turned out to be about 19 centimeters high, but in its original state, according to the researchers, it was about ten centimeters larger. The figurine has an anthropomorphic face with distinct eyes, nose, lips and chin. Around the edges of her face, apparently, is a headdress, decorated on both sides with five holes. Perhaps in this way the ancient author wanted to depict a cap.

According to Matthias Pfeil of the Bavarian Monuments Office, the figurine depicted the goddess of water. Perhaps in those days people considered the place where they found it sacred. For this reason, the small figurine was used as a ritual offering and was probably credited with magical powers. Stefanie Berg from the same organization added that similar figurines are known from the Western Black Sea region and date back to the 5th millennium BC. However, there are no direct analogies of the approximate same age for this find.