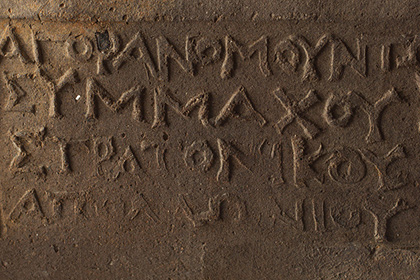 Expedition of the Institute of history of material culture (IIMK) RAS opened agricultural settlement era of the Bosporan Kingdom, dated around the IV century BC, at the construction site of the highway to the bridge across the Kerch Strait to the Taman Peninsula.

Studies have shown that among the villagers was the official in charge of the accounting of agricultural produce. About it reported in a press release, the Institute received by the editors”.

In one of the ancient tombs archaeologists have discovered made in Sinop vessel. Scientists suggest that one of buried in this tomb could serve as the official responsible for the bulk of grain or wine.

Historians believe that the pot was measured, despite the fact that it has no scale, only a rectangular stamp with names agoranomos (Greek officials who were in charge of the market) and logo in the form of a Trident. That it measured the grain, says occupancy: exactly one chojnik (1,094 liter) — a measure of grain, sufficient for a day of food.

In may 2016 in the Krasnodar region on the construction site of the highway leading to the bridge across the Kerch Strait, archaeologists discovered a hoard of silver coins — 15 pieces weighing more than 300 grams hidden in a ceramic vessel.