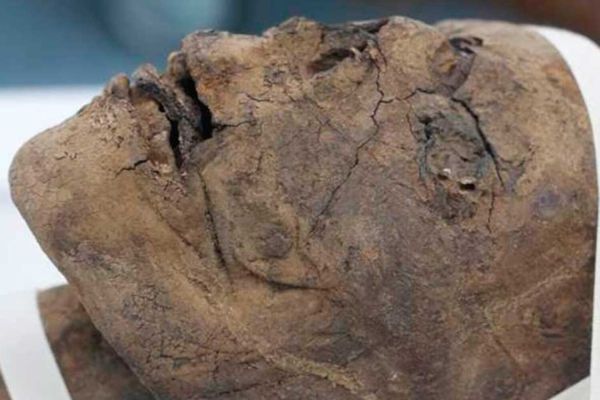 Radiologists and archaeologists from Christ Church University of Canterbury performed a CT scan on the head of an ancient Egyptian mummy that was discovered several years ago in the attic of a house in a small town in England. Her brain was removed, and already in England they could insert a tube of unknown material into her nose. It is reported by Kent Online.

The 2,700-year-old head of an Egyptian mummy was a gift to someone in Ramsgate, a seaside town in Kent, England. Sent as a souvenir in the 1820s, it ended up in the attic of a man who died in 2018. The head of the mummy was discovered by his brother, who donated the find to the Canterbury Museum. In 2020, it was studied using radiography. Then they found out that the mummy was an adult woman.

Now it has been studied by computed tomography. It turned out that the mummies had their brains removed during a post-mortem ceremony that took place in Per-Nefer, or “house of beauty.” The priests used hammers and chisels to access the brain through the nasal bone, through which they inserted an iron hook and slowly pulled out the contents of the cranium. Then they scooped out the remains with a spoon and washed the freed skull with water.

Radiologists-archaeologists managed to study in detail the condition of the mummy’s teeth. Apparently, the woman ate rough food throughout her life. At the same time, her language was perfectly preserved, which emphasizes the skill of the ancient embalmers. A strange tube of unknown material was found in the woman’s nostril, which could have been placed there already in Victorian England.