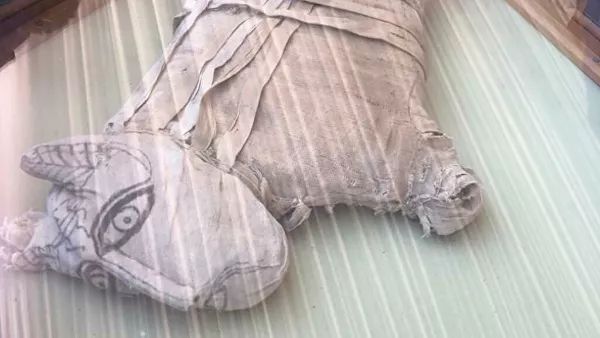 An Egyptian archaeological mission discovered the burial of mummies of sacred animals and birds, as well as dozens of artifacts dating to different periods of the history of Ancient Egypt, in the area of ​​the Saqqara complex in the suburbs of Cairo, said Khaled al-Anani, the Minister for Monuments of Antiquities.

“This is not just a new find, it is a museum,” the minister said at a press conference in Saqqara.

According to him, the most interesting are two finds, which, according to preliminary data, are mummies lion. “We carried out preliminary studies, including scanning, and with a high probability we can say that we are talking about cubs whose age was 6-8 months,” the minister said.

He explained that archaeologists also found mummies of cats, mummified mongoose, small crocodiles, calves, falcons. “We are now considering which operating museums to send these findings to, but perhaps a separate museum will be created,” the minister added.

As explained by RIA Novosti, the head of the archaeological mission in Saqqar, Mohammed Yousef, the finds presented on Saturday belong to the XXVI dynasty of the pharaohs who ruled about 2700 years ago. “The findings date back to the seventh century BC, that is, their age is 2700 years,” the agency’s source said.

According to him, Skkara among the ancient Egyptians was a kind of center of worship of sacred animals. Along with animal mummies, archaeologists also discovered dozens of statues of ancient Egyptian gods, ritual objects.

The burial sites so far discovered in the necropolis of Saqqara mainly relate to the period of the Ancient Kingdom (approximately XXIII – XXI centuries BC), but centuries later, during the XXVI dynasty (VII – VI centuries BC), a large-scale restoration was carried out here and beautification, it was the era of the revival of Egyptian civilization. To this period, scientists include animal mummies.