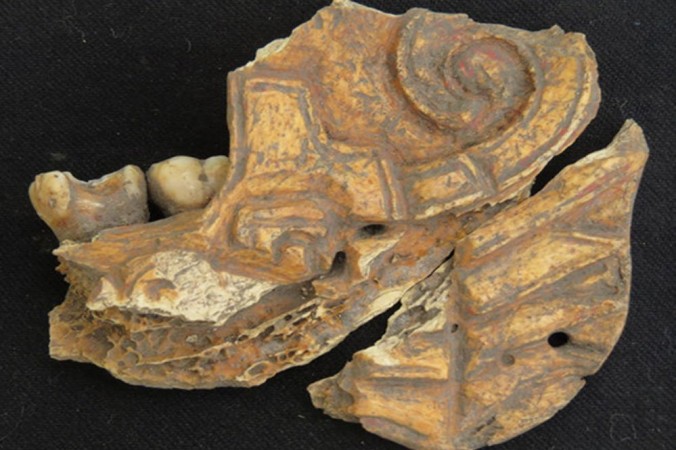 Archaeologists have unearthed a human jaw painted in Mexico, in the place related to the ancient Zapotec civilization. It is believed that the bones were used as necklaces and pendants during the performance of rituals of ancestor worship.

Unusual artifacts found in the ancient ceremonial location in the valley of Oaxaca in southern Mexico. The area was first inhabited in 700-600 BC, and the last opening belongs to the period from 200 BC to 350 ad

The Zapotecs, or “people of the clouds” as they are sometimes called, is an indigenous, pre-Columbian civilization that existed around 2500 years ago. They left impressive ruins, this tribe had a great influence on many subsequent culture, which replaced the Zapotec.

Decorated jaw bone discovered on the ceremonial square Dainzú, together with artifacts in honor of the God of the Thorn-Totec, who brought human sacrifices. But researchers do not believe that jaw taken from the victims. According to Jeremy Pink, graduate student, University of Oregon, Zapotecs, and probably used the bones of their ancestors in rituals to demonstrate their connection with their ancestors as a way of legitimizing his position in the tribe”.

The researchers also found about 3000 fragments of ceramic figurines, 30 molds for casting and 1600 fragments of whistles. Some of the figurines depict the Spike-Totaka, many not identified. Mesoamerican civilization known for its richly decorated and complex whistles that imitated the sounds of nature, animals and even human screams. Whistles had the shape of animals, people or mythical creatures. Scientists believe that the whistles and figurines were intentionally broken as part of the rite.