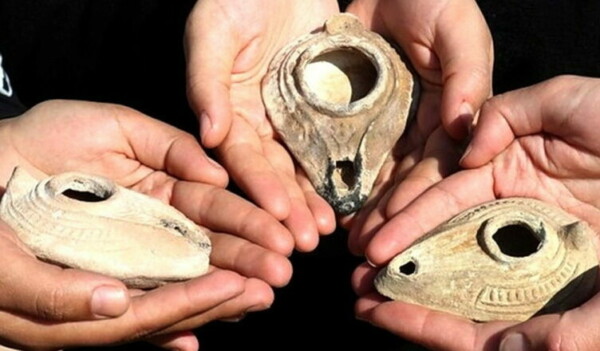 In the south-east of Turkey, among the ruins of the Zerzevan castle in the city of Chinar (Diyarbakir province), archaeologists discovered 48 ancient lamps of about 1,500 years old.

The head of the excavations, associate professor Aitach Koshkun, said that the lamps most likely belong to the Roman period and give more information about the history of the castle.

Koshkun noted that the place where the artifacts were discovered could be an ancient store. Each lamp has different signs, including the sun, stars or letters.

Lamps were found near the underground temple of Mithra, erected 1700 years ago during the Roman era, which was discovered in 2017. Zerzevan Castle once served as a military fortification and witnessed military clashes between the Romans and the Sassanids. It is located on an area of ​​six hectares and is surrounded by walls with a height of 12 to 15 m and a length of 1200 m, including a 21-meter watchtower.

The walls of the castle were repaired during the Byzantine emperor Anastasius (491-518) and Justinian (527-565), and some parts were completely rebuilt.

In a vast space are the church, administrative buildings, the ruins of ancient houses, storage of grain and weapons, an underground temple and shelters, rock tombs and water channels.

Zerzevan Castle is located on a 124-meter-high rocky hill between Amida and Dara (not far from modern Mardin). Two years ago, archaeologists opened a secret secret passage and an underground sanctuary in the castle, which was used as a military settlement in the Roman era.