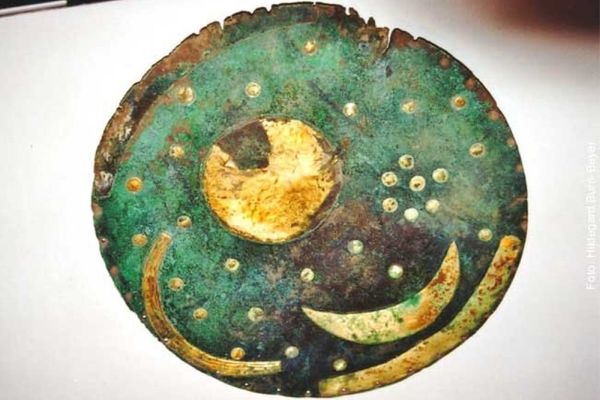 Scientists from Germany have clarified the dating of one of the most famous and mysterious artifacts found in recent years. The Nebra Celestial Disc, considered the oldest depiction of the cosmos, is younger than thought.

The study was published in the journal Archaologische Informationen, and a summary of it appeared on the website of the Goethe University in Frankfurt am Main. Experts from the Ludwig-Maximilian University in Munich also took part in the study.

The Nebra Celestial Disc is one of the most significant archaeological finds in German history. In 2013, it was included in the UNESCO Memory of the World Register. This artifact was discovered in 1999, and was found by “black diggers”. Presumably, it was found along with swords, axes and bracelets from the Bronze Age.

It was from the accompanying artifacts that the disc was dated. The fact is that dating was carried out by analogy with other similar objects, in fact, according to their style. However, this disc has no analogues in the world, so there was simply nothing to compare it with. In addition, the researchers used the information provided by the captured grave robbers. And it might not be entirely true.

Only now, two decades after the discovery, scientists have attempted to re-date the unique artifact. The results were sensational. It turned out that the disc should be dated to the Iron Age, meaning it is probably about 1,000 years younger than previously thought.

This immediately casts doubt on the historical value of the disc. After all, until now it was considered the oldest map of the cosmos in the world. However, if he is officially rejuvenated by 1000 years, he will lose this status. What do scientists base their conclusions on?

From the summary report, it follows that they “carefully analyzed the circumstances of the discovery and the results of previous studies of the celestial disk of Nebra.” They believe that the place that until today was considered the place where the artifact was found, in fact, was not. In their opinion, the disc was found somewhere else.

They also pointed out that there is still no convincing evidence that swords, axes and bracelets of the Bronze Age were found lying together at all. Archaeologists doubt this because such finds are not typical of the Bronze Age. If so, then, most likely, the disc was not found together with other objects during some excavations.

According to archaeologists, the disc needs to be re-examined and evaluated as an individual find. Culturally and stylistically, Nebra’s heavenly disc, according to the authors of the work, does not fit into the traditions of the Early Bronze Age, that is, the beginning of the second millennium BC, to which it was dated. But the researchers saw in it the motives of the first millennium BC, that is, the Iron Age. This discovery promises to make a real sensation in the scientific world.