Archaeologists unearthed a palace in the biblical city 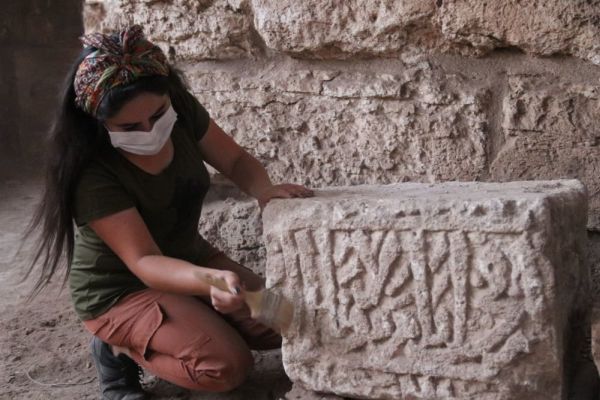 Turkish archaeologists excavating the province of Sanliurfa in southeastern Turkey have discovered the main gate of the historic Harran Palace.

According to the Daily Sabah, the first excavations in Harran were carried out in 1950. But the most active research has been going on only for the last two years. During this time, archaeologists managed to excavate the historic Harran Palace. The main gate of this monumental object was the latest find so far.

“We have completely excavated one of the two famous gates of the historic palace,” says excavation leader Mehmet Onal, head of the Department of Archeology at Harran University. “The gate was about seven meters high and was made of basalt. On these stones we found inscriptions in Arabic. dating of this historic building “.

The analysis will also include inscriptions and symbols on seals, rings and arrowheads also found during excavations. Harran is considered one of the oldest cities in the world, since 2000 it has been included in the preliminary list of UNESCO World Heritage Sites.

People have lived here since at least 6000 BC. This city is mentioned several times in the Bible, it was the capital of two empires: Assyria and Umayyads.

However, the excavated palace is relatively young. According to archaeologists, it was built about 900 years ago. So far, his age has been dated from the analysis of the bath, which was excavated earlier. It was equipped with rooms with cool, warm and hot baths. It has been established that this bath was built in the XII-XIII centuries during the Zengid dynasty.

At the moment, Harran Palace is one of the rare examples of such structures that have survived from the Middle Ages in the Middle East. Judging by the results of the excavations, it was huge and consisted of hundreds of rooms.

We add that Harran is located 44 kilometers southeast of the city of Sanliurfa, not far from the Syrian border. In ancient times, the area was an important trading center in Mesopotamia and was located on the trade route that led south to Nineveh, in the territory of modern Iraq.