Archeologists have established that the Lord’s Coffin has remained intact 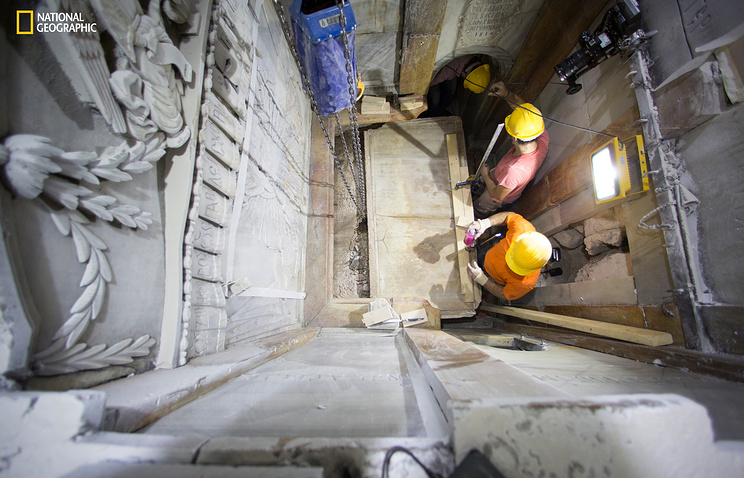 The archeologists investigating a shrine of the temple of the Lord’s Coffin in Jerusalem after the marble slab closing it has been removed from it for the first time in 450 years, have established that the funeral Bed of Christ has remained intact. Has reported about it on Monday the National Geographic magazine.

Archeologists have removed on October 26 a marble slab from a funeral bed of Christ in Kuvukliya – a chapel over the Lord’s Coffin in the Jerusalem Church of the Resurrection (it is known also as the temple of the Lord’s Coffin), which has been established in the 16th century and since then didn’t rise. Construction over a bed of a plate has been connected with the fact that many pilgrims tried to break off to themselves a part of a relic. Having removed a plate, scientists have found under it many stone fragments.

Having sorted stones, archeologists have found under them other plate with the cross cut on it which as scientists assume, has been established at the time of Crusades. At the final stage of work researchers have found the funeral bed cut in limestone. It has become clear that it was preserved in spite of the fact that walls of a cave in which it was have been destroyed together with the initial building of the temple of the Lord’s Coffin at the beginning of the 11th century by order of the Caliph Hakeem in the power of whom at that time there was Jerusalem.

Scientists investigated an ancient monument continuously within 60 hours until in the evening on October 28 the plate closing a shrine hasn’t been established on the former place again. During this time scientists have performed careful inspection and shooting of a monument, and also have documented the finds made by them for further studying. According to the Russian spiritual mission in Jerusalem (RDM), Kuvukliya’s restoration is carried out by specialists of the Athenian national technical university in coordination with the staff of the Florentine university and experts from Armenia.

The place of burial of Jesus Christ was revealed three centuries later after a crucifixion messengers of the Roman emperor Konstantin who has proclaimed Christianity the state religion. The cave where there was a Lord’s Coffin, has been found under foundation of the pagan temple built according to instructions of the emperor Adrian who has enjoined to create new colony on the place of Jerusalem destroyed by Romans in the 70th year AD.

“We can’t tell with absolute definiteness that the place where there is a temple of the Lord’s Coffin, is the place of burial of Jesus, however at us, certainly, there is no other place which so precisely would correspond to him, and we have no bases to reject authenticity of this place”, – quotes National Geographic the Israeli expert in archeology of Jerusalem Dan Bachat.