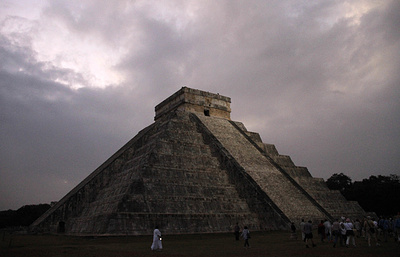 The unique method of a three-dimensional electrotomography allowed the Mexican scientists to make important discovery in the sacred city of the Maya Chichen Itza on the peninsula Yucatan. It is about the small pyramid which is in Kukulkan’s pyramid also known under the name “El-Castillo”. Researchers from engineering faculty of National autonomous university of Mexico reported about it on Wednesday at a press conference.

According to experts, the construction was constructed by the first inhabitants of Yucatan during the period from 500 to 800 of our era. Its sizes make 10 meters in length and 30 in width. Nakhodka was made the same experts who confirmed the previous year that under Kukulkan’s pyramid there is an underground lake about 20 meters in depth. Chichen Itza it was based, presumably, in the 6th century of our era. By the 16th century when the Spanish colonization of America began, it stayed several centuries in desolation.

Kukulkan’s pyramid – god of wind and water, fire and air – is considered one of the main sights of the ancient city which in 1988 was entered in the list of objects of the world heritage of UNESCO. Now it enjoys wide popularity among the tourists coming to Mexico, and annually he is visited by more than one million people.