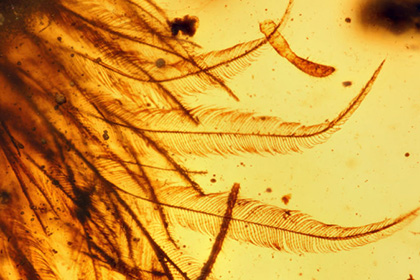 Scientists from the Chinese geological university in Beijing found the tail of a small dinosaur covered with feathers in amber. Researchers report about the opening in article published in the Current Biology magazine.

The leading author of scientific work Lida Xing found a mineral in the market in Myanmar. Dealers considered that in a piece of amber there are fragments of some plant. However paleontologists found out that it was the tail consisting of eight vertebras and covered with well remained feathers. They established that remains belonged not to an ancient bird, but the small predatory dinosaur living 99 million years ago.

The top surface of a tail as showed researches, is painted in chestnut color, and lower — in white. Besides, feathers don’t have рахис (the central core) which is characteristic of modern bird species, but there are small beards and borodochka (smaller branches) creating fans.

According to scientists, amber samples which contain other soft parts of dinosaurs can be in the future found.