Artificial lungs can be worn in a backpack 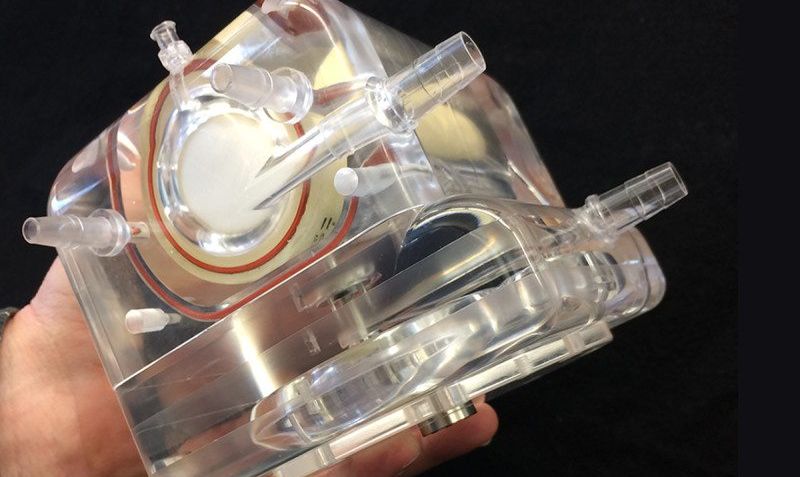 Artificial lungs, compact enough to be carried in an ordinary backpack, have already been successfully tested in animals. Such devices can make life much more comfortable for those people whose own lungs do not function properly for any reason. Till now for these purposes the rather bulky equipment was used, but the new device developed by scientists at the moment, can change this once and for all.

A person whose lungs are unable to perform their basic function is usually attached to machines that pump their blood through a gas exchanger, enriching it with oxygen and removing carbon dioxide from it. Of course, during this process a person is forced to lie on a bed or a couch. And the longer they stay in a recumbent state, the weaker their muscles become, making recovery unlikely. It was to make patients mobile, and compact artificial lungs were developed. The problem became especially urgent in 2009, when an outbreak of swine flu occurred, as a result of which many lung patients were refused lung.

Artificial lungs can not only help patients recover from certain pulmonary infections, but also allow patients to wait for suitable donor lungs for transplantation. As you know, the turn on donor organs can sometimes last for many years. The situation is complicated by the fact that people with lung failure have, as a rule, greatly weakened the heart, which is to pump blood through an external device.

“Creating artificial lungs is a much more difficult task than designing an artificial heart. The heart just pumps blood, whereas the lungs are a complex network of alviols, within which the gas exchange process takes place. To date, there is no technology that can even come close to the effectiveness of real lungs, “says William Federspiel of the University of Pittsburgh.

William Federspiel’s team developed artificial lungs that include a pump (supporting heart) and a gas exchanger, but the device is so compact that it can easily fit in a small bag or backpack. The device is connected to the tubes connected to the circulatory system of a person, effectively enriching the blood with oxygen and removing from it excess carbon dioxide. In the current month successful tests of the device on four experimental sheep were completed, during which the blood of animals was saturated with oxygen during different periods of time. Thus, scientists gradually brought the time of continuous operation of the device to five days.

An alternative model of artificial lungs are developed by researchers at the University of Carnegie – Mellon all in the same Pittsburgh. This device is intended primarily for those patients whose heart is healthy enough to pump blood independently through an external artificial organ. The device is also connected to the tubes directly connected to the heart of a person, after which it is attached to the body by the straps. While both devices need a source of oxygen, in other words – in an additional portable tank. On the other hand, at the moment, scientists are trying to solve this problem, and they are quite successful.

Right now, researchers are testing a prototype of artificial lungs, which does not need a balloon with oxygen. According to the official statement, the new generation of the device will be even more compact, and oxygen will be released from the surrounding air. The prototype is now tested on laboratory rats and demonstrates truly impressive results. The secret of the new model of artificial lungs is the use of ultra-thin (only 20 micrometers) tubules made of polymer membranes, significantly increasing the surface of gas exchange.