As a carnivorous plant has developed 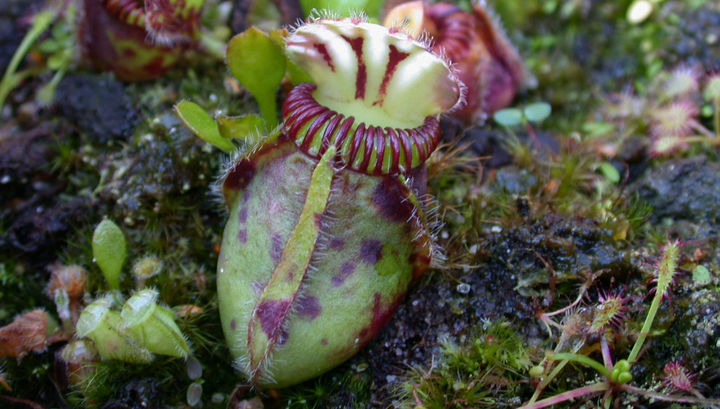 Scientists have deciphered the genome of Australian insectivorous plants with cunning devices to lure insects right into a death trap. The work of geneticists has helped them to answer the old question: why do some plants become predators?

Scientists have long wondered how plants live in different parts of the world, developed what is called “bloodlust”. To this end, the researchers studied Australian zealot mesoscopy (Cephalotus follicularis), and then compared the obtained information with genetic data of other carnivorous plants found in North America and tropical Asia. In particular, sarracenia purple (Sarracenia purpurea) and nepenthes (Nepenthes alata).

All these plants are similar to each other: they have cupped leaves that are inside are quite slippery, so insects trapped inside, it is very difficult to get out of the trap. Prey caught in a “predatory” part, exposed to osobogo “cocktail” of enzymes that will digest the insect. Thus the plant can absorb nutrients from their unwary victims.

Scientists have found that zealot mesoscopy is a closer “relative” of the carambola (Averrhoa carambola) than other types of carnivorous plants. However, the data suggests that predatory behaviour has evolved in parallel with quite distant from each other plants.

“It sounds very paradoxical that plants began to chew on the animals, not Vice versa. But we really dealing with a classic case of convergent evolution,” says the head of the team of researchers that sequenced the genome of plants, albert Victor (Albert Victor) from new York University in Buffalo.

Explain what convergent evolution is the process in which there is a similarity between organisms of various taxonomic groups dwelling in similar conditions.

The researchers found that the biological mechanisms of plants for digestion of prey were remarkably similar. Although, again, pay attention to it, all plants develop their “predatory” skills in different environments.

Experts were able to identify genes encoding proteins that are involved in the digestion of insects. In addition, they analyzed the same “cocktail” of enzymes (a liquid that helps plants to digest insects) in all the three species of carnivorous plants.

It turned out that each of these “redeveloped” special proteins that are normally produced near the cell walls. Latest warnings damage resulting from the herbivorous plant or the environment. Such elements are now helping plants to digest insects unfortunate enough not to be stuck inside traps.

In particular, chitinase break down insects, and acid phosphatase allows carnivorous plants to absorb the nutrients from their victims.

The work suggests that there are quite limited ways of “converting” ordinary plants to carnivores, adds albert.

“Studying the plants have a limited set of tools, and they all tried to use it to mutate. In the end, the solution was found”, — concludes the scientist.

There is another – perhaps most important – question: why do some plants have developed predatory abilities and others don’t? Researchers believe that the answer lies in the environment, namely the lack of nutrients (nitrogen and phosphorus) necessary for full development.

Experts studying the genome of the carnivorous plants, found that they had all acquired the same lethal molecular “recipe”. Apparently, the scientists write, each learning from the plant has adapted to its own habitat poor in nutrients. And all of them used very similar tactics. Thus, they tried to obtain nitrogen and phosphorus from their prey, scientists say.

“Carnivorous plants often live in environments poor in nutrients. So developing the skills for catching and digestion of insects could be for plants a necessary condition, given the scarcity of other power sources,” explains another author’s work Keggi Fukushima (Kenji Fukushima).

The fact that all three species of carnivorous plants have chosen a similar evolutionary path, does not mean that there was no other options. But, most likely, “re-purposing” of proteins has become the most viable way to survive in the current environment, experts say.