Astronomer figured out how to accelerate a spaceship with black holes 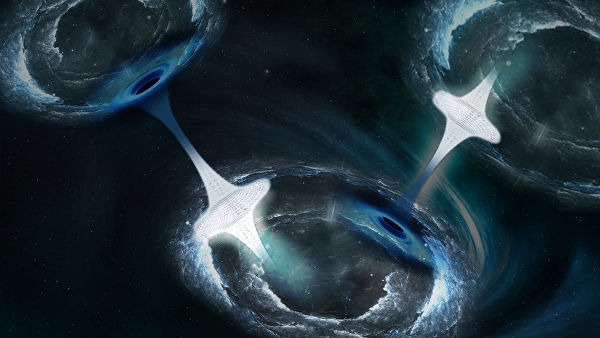 Well-known planetologist David Kipping has figured out how to use the attraction of pairs of black holes as a kind of “gravitational mirror” in order to accelerate the spacecraft to near-light speeds. His calculations were published in the electronic library arXiv.org

“For simplicity, I call this acceleration technique a“ halo engine ”, as the ship picks up speed as a result of interacting with a ring of light enveloping a black hole. Only the Milky Way has more than one hundred million black holes, which will be enough to create a dense” intragalactic “network of such accelerators,” – writes the astronomer.

The possibilities of mankind in the exploration and study of distant cosmos today are limited by one simple formula, which Konstantin Tsiolkovsky derived more than a century ago to calculate how much fuel a rocket needs to pull a load of a certain mass into Earth orbit or to fly to other worlds.

In accordance with his calculations, for the development of high speeds necessary for interstellar flights, it is necessary to have exorbitantly large reserves of fuel, which the Earth will not be able to get either now or in the future. The reason for this is simple – they will be heavier than the mass of the Universe many times.

Therefore, scientists have long been trying to “reset” the most unpleasant part of this equation – to save a spacecraft from having to have fuel on board, or to learn to extract it from the surrounding interstellar space. For example, in its role a rarefied gas, accelerated under the action of some physical forces, or a directional beam of light can act.

Over the past decades, both fully functional engines that do not need large amounts of fuel, for example, ionic and magnetoplasma power plants, and more futuristic and simply dubious ideas like the Breakthrough Starshot project of Russian businessman Yuri Milner, and the EmDrive engine that “violates” laws of physics.

All these ideas, as Kipping notes, have one common drawback – even if such installations can work indefinitely, they can accelerate only small objects to near-light speeds necessary for building a full-fledged “interstellar civilization.”

A way out of this situation was found in the mid-1960s by the famous Freeman Dyson, a British theoretical physicist and author of many concepts about how super-developed alien civilizations can look. He noted that a sufficiently strong spacecraft could “free” accelerate to near-light speeds, flying through a close pair of white dwarfs or neutron stars.

Something similar, as Kipping discovered, can be carried out using not two, but only one object – a black hole in star mass, and for this it is not necessary to come closer to it and put yourself at risk.

The fact is that 25 years ago, theoretical physicists, who calculated the properties of space in the vicinity of black holes, noticed that under certain circumstances they would not absorb matter, but repel it. For example, a photon moving along a well-defined trajectory and approaching the event horizon at a certain angle will not intersect, but will reflect from it and return to the same point from which it came, rounding the object from the other side.

Considering the properties of such particles, the British planetary scientist found out that the light “boomerang” will not just return back to its owner, but also “steal” some of the energy from the black hole, from whose horizon of events it will reflect.

This, he said, would be enough to accelerate a spacecraft with a mass from Jupiter to a speed that is about 1.4 times faster than a single black hole moving around the center of the Galaxy. Accordingly, for double systems in which black holes can rotate around each other only 3-5 times slower than the speed of light, this maneuver will allow achieving really fantastic rates of movement.

In addition to speeding up spacecraft, the same feature of black holes, as Kipping notes, can be used for other purposes – braking of incoming spaceships, gravitational “extraction” of virtually infinite and free energy, or stockpiling its surplus.

Of course, for humanity, this idea remains science fiction, but other, more highly developed civilizations could already create such “halo-engines”. Traces of their existence, according to the planetologist, can be seen by the anomalously high frequency of merging and convergence of double black holes.