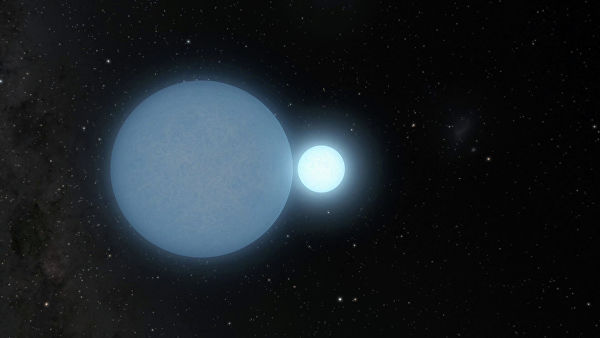 Scientists have discovered in the constellation Bootes a unique pair of white dwarfs, located so close to each other that they could fit inside Saturn. They produce gravitational waves that can be “seen” by the eLISA telescope under construction, according to an article published in the journal Nature.

“When a dimmer star travels across the disk of a second, bright white dwarf, it blocks most of the light its neighbor produces. As a result, the whole system blinks every seven minutes, which we saw while watching J1539 + 5027” – Tells Kevin Burge (Kevin Burdge) from the California Institute of Technology (USA).

White dwarfs are the remnants of the old “burnt-out” luminaries of small mass, devoid of their own sources of energy. White dwarfs appear at the final stage of the evolution of stars with a mass not exceeding the solar one more than 10 times. Ultimately, our Sun will turn into a white dwarf.

Such “dead stars” are of interest to astrophysicists for several reasons. First, they are the progenitors of supernovae of the first type, which allow very accurately estimate the distances in space, and secondly, they consist of exotic superdense matter, the properties and structure of which scientists still do not fully understand.

Even more interesting to astronomers are very close pairs of white dwarfs. They gradually lose energy, emitting gravitational waves, as a result of which they come closer together. The closer the “dead stars” are to each other, the more their gravitational interactions will distort the space, and the distance between the stars will begin to decrease faster and faster.

For this reason, astronomers have been looking for close pairs of white dwarfs for a long time and actively, hoping to see how the space-time oscillations produced by them will affect their own radiation, as well as capture these waves with the eLISA gravitational telescope under construction. The only known object of this kind, the double star WD J0651 + 2844, was discovered in 2011 in the constellation Virgo.

Burge and his colleagues discovered a second example of an equally close neighborhood of white dwarfs, observing the night sky with the help of the newly built ZTF telescope, specially created for observing objects whose brightness changes very quickly and dramatically.

A year ago, he began his work, and almost immediately after turning on this device, scientists came across a curious star in the constellation Bootes, whose brightness inexplicably fell almost two magnitudes, about five times every seven minutes.

Having studied this object, ZTF J1539 + 5027, with the help of other optical telescopes, astrophysicists confirmed that it really “blinks”, and found out that it is another close pair of white dwarfs. One of them, judging by the degree of decrease in brightness, is much hotter, larger and brighter than its satellite, whose mass is about five times less than that of the Sun.

As the researchers show, these luminaries rotate around each other at a record high speed of almost a thousand kilometers per second, which is equivalent to 0.3% of the speed of light. Due to the small distance between them – 80 thousand kilometers – they approach each other so quickly that it can be noticed in a few years even with the help of already existing telescopes.

According to current estimates of the researchers, the fusion of these white dwarfs will occur in moments by cosmic standards, not later than in 210 thousand years. This makes ZTF J1539 + 5027, like its “cousin” WD J0651 + 2844, one of the most attractive objects for observing the “constant” sources of gravitational waves and exotic tests of the theory of relativity.

In particular, scientists expect that the LISA European gravitational telescope, which will be launched into space in 2034, will be able to see them and distinguish them from other “Einstein” space-time oscillations just a week after launch. This will allow ZTF J1539 + 5027 to be used as a kind of “litmus test” to test the performance of this observatory, Burge and his colleagues conclude.