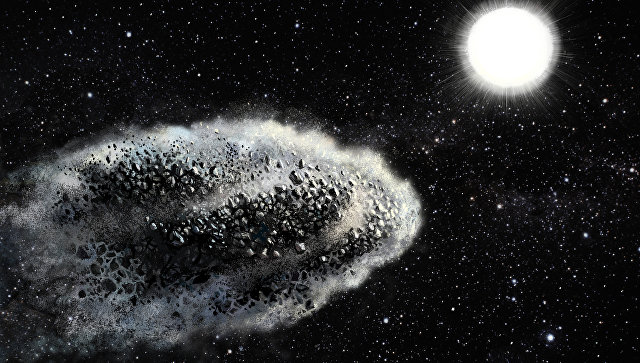 Scientists have confirmed the existence of two giant clouds of dust circling around the Earth at a distance of about 400 thousand kilometers from its surface. Their findings were presented in the journal MNRAS.

“Kordylevsky’s clouds are the two most imperceptible objects in the immediate vicinity of the Earth. They are approximately at the same distance from it as the Moon, which is why astronomers never actually notice them. Therefore, we are very pleased that we were able to confirm the existence of these two pseudo-satellites of our planet, “says Judit Sliz-Balogh of the University of Budapest (Hungary).

As early as the 18th century, scientists established that small celestial bodies can move in one orbit with a planet if they are near points in front or behind it, where the gravity of the Sun and the planets are balanced.

Thousands of such objects, or “Trojan asteroids,” were found long enough in the orbits of Jupiter, Mars and Neptune, but until recently, scientists could not find any such asteroid near Earth. As the researchers say, the “Trojan” satellites of the Earth are very difficult to search for, as they are very close to the Sun, if you look at them from the surface of our planet.

Schliz-Balog and her colleagues added two more objects to their host – the so-called Kordylevsky clouds, which had acquired a mythical and highly controversial status over the past half century.

The existence of their first spoke Polish astronomer Kazimir Kordylevsky. Observing two Trojan points on Earth’s orbit in 1961, he noticed that in one of them there was a large accumulation of dust, eclipsing the light of the Sun and stars.

This statement, as noted by Schles-Balog, was met with skepticism by the scientific community, since astronomers did not believe that such large objects could maintain stability at these points. Later, scientists have repeatedly checked the calculations Kordylevsky, but could neither confirm nor deny them.

Hungarian astronomers have come up with an ingenious method for finding traces of the existence of these clouds and estimating their size. They began to observe not the heat and light that their dust particles can emit, but how collisions with them change the polarization of the sun’s rays passing through the “Trojan” points.

So the artist imagined the clouds Kordylevsky

After several months of observations, Schliez-Balogh and her colleagues managed to find traces of the fact that sunlight was linearly polarized by almost 20% in the L5 region, the Trojan point located directly behind the Moon.

Analyzing its properties, scientists came to the conclusion that the object was generated not by one but by two clouds of dust, each of which is about three times larger than the main natural satellite of the Earth. It is not yet clear how stable they are and how long the Moon is “pursued”, rotating with it around our planet.

Schliz-Balog and her colleagues plan to find answers to these questions by observing the clouds of Kordylevsky with the help of more powerful orbital telescopes, the work of which will not be affected by light pollution and dust in the atmosphere.