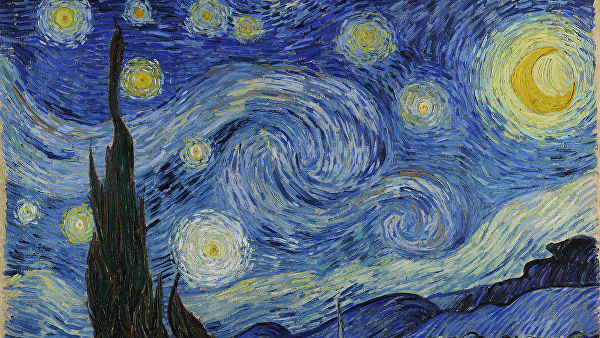 The beautiful spirals and curls in Van Gogh’s “Starry Night” painting are very similar not only to the exact mathematical description of turbulent air flows in the Earth’s atmosphere, but also to supersonic gas and dust vortices in “star nurseries”. This conclusion was made by scientists who published an article in the electronic library arXiv.org

“We have shown that” Starry night “really resembles real turbulence, which directly affects how we see stars at night. At the same time, the pattern of energy distribution in vortices in the picture suggests that it very accurately reflects how the flows behave gas in dense gas and dust nebulae, where new stars are born, “- write scientists.

This canvas by Van Gogh, as today considered by experts on his work, was written by the great impressionist in June 1889, immediately after he cut off his earlobe and ended up in the hospital for the mentally ill in the town of Saint-Remy-de-Provence. Now it is stored in the Museum of Modern Art in New York and is considered one of the most famous Dutch masterpieces.

According to the legend, the picture shows those parts of the sky that were visible from his bedroom during the next exacerbation of his mental problems in the spring of 1899. Such statements have repeatedly forced both astronomers and physicists to study in detail the “Starry Night” in the hope of verifying such statements and to understand exactly what Van Gogh wanted to tell us.

These searches led to a very interesting and unexpected discovery. Ten years ago, as James Beattie from the National University of Australia in Canberra and Neco Kriel from the Queensland University of Technology in Brisbane noted, scientists from Mexico noticed that the beautiful spirals and coils in the Van Gogh night sky look like turbulent air flow.

They checked whether this is in fact the case, using a set of formulas and mathematical principles, which the famous Soviet mathematician Andrei Kolmogorov derived in 1941 to describe turbulence. As it turned out, the Van Gogh picture really corresponded to them, and now physicists, chemists and even biologists often try to “copy” it, using various turbulent processes arising in their experiments.

Australian astronomers discovered another interesting quality of “Starry night” related to turbulence, having studied this picture in more detail than their Mexican colleagues did. They tried to compare it with Kolmogorov’s calculations as honestly as possible, breaking the picture by color and following the formation of chaotic, fractal waves in each of its “copies”.

By counting their number and analyzing their shape, astronomers found out how the energy was distributed inside these vortices. As it turned out, these measurements were almost identical for all the “copies” of the Van Gogh picture and at the same time they fit well with the predictions of Kolmogorov’s theory.

In other words, the curls in the night sky of the “Starry night” very well repeated the way real turbulent air flows interact with the light of distant luminaries, galaxies and nebulae, causing them to “blink” and almost imperceptibly to tremble.

Moreover, further analysis of these curves shows that they no longer resemble chaotic streams of air in the Earth’s atmosphere, but supersonic turbulent flows of gas and dust arising in the “star-nursery” in the Milky Way and in other galaxies. This, the researchers conclude, makes the masterpiece of the Dutch impressionist even more interesting for scientists.