Astronomers have found out when the swarm of comets destroys Earth 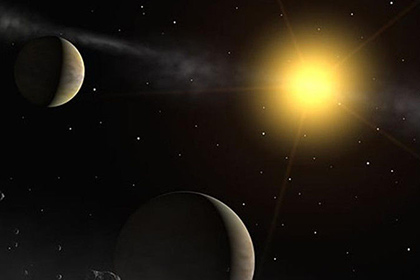 The Polish astronomers have found out that approximately through one million years the star to Gliza 710 will pass in dangerous proximity from Solar system that can cause bombing of Earth comets from an Oort cloud and lead to a global disaster.

Now to Gliza 710 is in 64 light years from the Sun and approaches it. Through 1,35 million years she will reduce this distance to 13 thousand astronomical units (astronomical unit is equal to distance from Earth to the Sun), or 77 light days. Thus, the star will be in Oort cloud limits — spherical area around Solar system which as scientists believe, is formed by ice objects and is a source of comets.

Researchers consider that gravitation will change Gliza trajectories of space bodies and will direct many of them to Earth. Considering that, by new estimates, the star will be almost five times closer, than was considered earlier, the risk of collision of comets with our planet that can lead to disappearance of life on her, is very high. About an every year to the Sun about 10 comets will arrive, and this situation will remain during 3-4 million years.

To Gliza 710 rather dim orange dwarf whose mass makes about 0,6 mass of the Sun represents.