Astronomers talk about the brightness of comet Leonard in December 2021 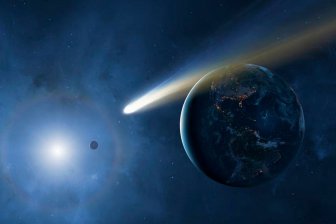 On December 12, 2021, comet Leonard (C / 2021 A1) will approach the Earth, which will fly 34.9 million kilometers from us. What will be the brightness of the celestial body? This issue, according to the website tajny.ru, decided to deal with foreign astronomers.

Comet Leonard was discovered on January 3, 2021 in the form of a spot of nineteenth magnitude – it was noticed by astronomer Greg Leonard from the Mount Lemmon Observatory, after whom the object was named. Calculations showed that the comet has spent the last thirty-five thousand years moving towards the Sun after the aphelion, which occurred at a distance of about 3500 AU. from the star. Now the comet is approaching the star and will pass at 0.62 AU. from it on January 3, 2022 – exactly one year after the discovery, which is very symbolic.

Before approaching the Sun, the comet will fly past the Earth – the minimum distance between C / 2021 A1 and our planet will be December 12. Scientists note that predicting the brightness of a recently discovered comet is a daunting task. comets can behave in unpredictable ways, heating up in the sun’s rays.

Astronomers believe Leonard’s comet may become a fairly bright object in the night sky in mid-December. Perhaps its brightness will be in the region of the fourth magnitude or even higher. In mid-October, an object of magnitude 12 can be seen in the southern part of the Big Dipper.