At Borodino found a mass grave of horses 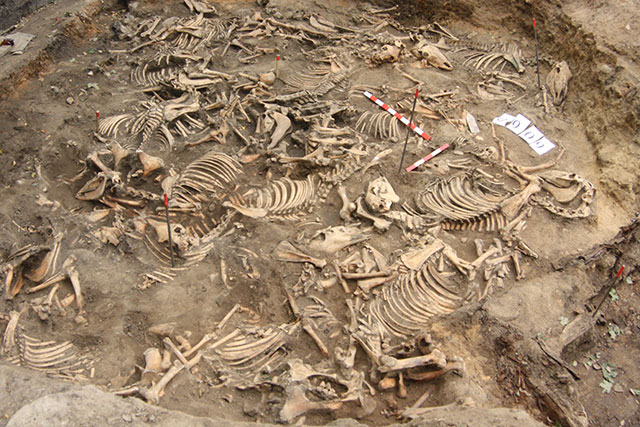 The discovery of the burial of horses near the village of Borodino (Moscow region), killed during battle in 1812. Archaeologists Mozhaisk expedition of Institute of archaeology Academy of Sciences together with the Centre for historical and urban research in 2009-2011 carried out the survey of the territory on the outskirts of the village, where the mansion of A. Begichevo (Davydova) and the Imperial Palace built to commemorate the 25th anniversary of the battle of Borodino, before the restoration of the Palace and Park ensemble for the State Borodino military-historical Museum-reserve.

In the pit of the ruined cellar was discovered the remains of 37 horses. It turned out to be one of the sanitary burials, which was made after the battle. It is known that the battle of Borodino 24-26 August 1812 (old style) went down in history as one of the bloodiest. Exact losses are unknown up to the present time: indicate that the Russian army lost 45 to 50 thousand, and the great army of about 35 thousand people. On the Borodino field was harvested from 26 to 45 thousand horse corpses, of which at least 8 thousand were buried.

What is interesting to science: Interest in this case was caused by the issue: Russian or French horses buried? Greatly complicated the situation is the complete absence in the burial of objects of horse harness. Studies of the preserved skulls and bones of the skeleton, determining age and sex, proportions of the skeleton, the comparison with the Museum collection materials on breeds of horses, conducted by scientists has revealed the following.

Most of the horses were stallions 5-10 years of age, which were used as riding and draft animals. Of the horses belonged to the primitive groups of species — steppe and forest. Horse height at the withers of 135 cm, most likely, was a local peasant horses or light horses of the Russian cavalry. Another part of the horses treated group improved breeds. Individuals growing from 136 to 160 cm (most horses) — army horse — drill or cavalry: French army, or horses, or military horses of the officers of the Russian infantry. A few large animals (from 161 to 191 cm), probably used as gun in the French artillery.

More accurate results could not be obtained due to the lack of osteological material on the European species of the XIX century in Museum collections. However, in General, the obtained results are consistent with established age and exterior criteria, typey part of the repair and the horses of the French and Russian armies, as well as historical information about the localization of the military units during battles. To clarify all these data had to conduct additional analysis of diverse literature.

Why should I know this: it is surprising, but archaeological finds at Borodino a little — the area is not actively investigated. Therefore, any findings shed light on the history of 200 years ago.

The horse literally and figuratively carried the main burdens of war. In General, the Russian campaign of 1812-1813 was for the cavalry of Napoleon’s army catastrophic: we started the campaign more than 38 thousand horses, crossed the Niemen in 1813, only about 3 thousand Excessive exercise, malnutrition, harsh climate was the cause of death of the European horses. On the bones of the extremities found in sanitary burial of individuals, presumably related to the band of the army horses of superior breeds, numerous traces of inflammation in the joints that prove that their life was on the limit of the body. Small primitive horses of the peasants and light Russian cavalry was certainly more hardy and unpretentious, but the lack of food and harsh conditions also did not contribute to their well being.

Unexpected archaeological discovery made us think about the role of domestic animals, especially horses, in a person’s life in different historical periods. There was even the idea to immortalize the memory of the fallen at Borodino horses special monument.