At CERN, a particle consisting of four quarks was observed for the first time 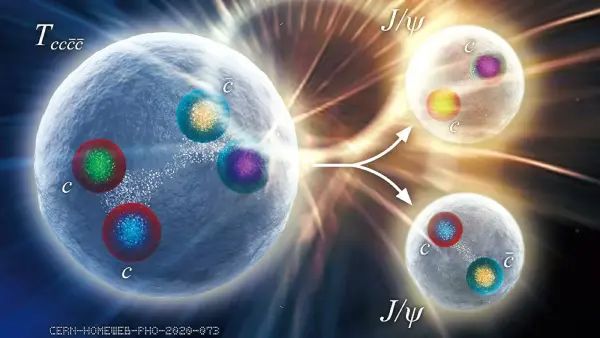 Scientists from the LHCb collaboration reported that for the first time they recorded an exotic particle consisting of four quarks in an experiment at the Large Hadron Collider. The results are published in Science Bulletin.

Strong interactions are one of the fundamental forces of nature that binds quarks into hadrons – the building blocks of atoms, such as the proton and neutron. According to the quark model, hadrons can be formed by two or three quarks. In this case, they are called mesons and baryons, respectively, and together – ordinary hadrons.

For the first time, a signal from an exotic hadron was observed by physicists in 2003 in the Belle experiment at the KEK accelerator in Japan. In subsequent years, several more exotic states were discovered, for a theoretical explanation of which the presence of four constituent quarks is required.

Now scientists from the LHCb collaboration have experimentally discovered a hadron consisting of four charmed quarks for the first time. The particle appeared in proton-proton collisions at center-of-mass energies up to 13 teraelectronvolts.

“It is very interesting to see the first experimental evidence of a charmed tetraquark. The unique composition of the new state makes it an ideal model for understanding the strong interactions inside hadrons,” – quoted in a press release, the words of one of the participants in the experiment, physicist Liupan An, who works at the National Institute nuclear physics in Italy.

The nature of the observed tetraquark states has not yet been determined. There are several possible explanations. Additional experiments will be required to confirm or refute them, scientists say.

“Observing LHCb opens up a new window for research in multiquark hadron spectroscopy. Additional research from both experimental and theoretical physicists in the future will provide an opportunity to understand the nature of the state of four charmed quarks,” said Yanxi Zhang, who works on the LHCb experiment at Peking University.

“If the interpretation of the four heavy quarks is correct, the full spectrum of these tightly bound states is expected to be discovered based on the data the LHCb collects in the near future,” said another study author, Giacomo Graziani of the National Institute of Nuclear Physics in Florence.

The LHCb is one of four major experiments currently underway at the world’s most powerful particle accelerator. The experiment is devoted to precision measurements of particles composed of heavy quarks – charmed and adorable.

In these studies, physicists study strong interactions, look for indirect evidence of new physics, and also try to unravel the mystery of the asymmetry of matter and antimatter. More than 1400 scientists and engineers from all over the world are participating in the LHCb collaboration.