At the bottom of the ocean found “sea demon” 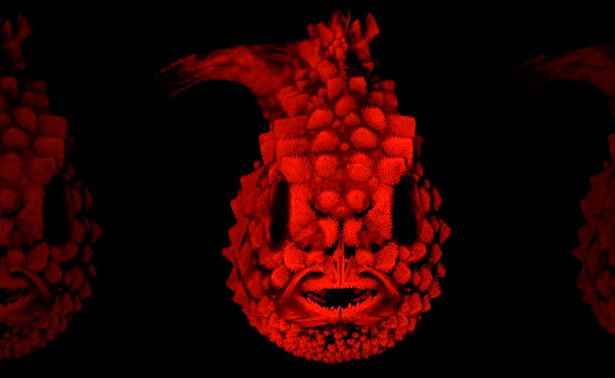 The photo shows a bristled bristle animal, which looks through its eyes, gleaming with a “satanic red fire”.

Professor of evolutionary biology and ecology at the University of Kansas Leo Smith made a “demonic” photo of a cute fish. The picture was obtained due to a special camera and a glow of fish scales.

The photo shows a bristled bristle animal, which looks through its eyes, gleaming with a “satanic red fire”. Small sharp teeth stick out from the open mouth.

Pacific prickly Pinagoras are sweet fish that swim imperceptibly in the depths of the ocean. They are not entirely harmless, because their bone spikes are quite sharp and well protected from predators.

“Holding such a baby in your hand is like taking on a cactus,” Smith said.

Such a demonic appearance in the image of Pinagoras acquired due to its ability to fluorescence. The professor used a special camera for the photo, which made the fish scales glow red.

“The instance highlighted itself, and all the rest of the frame was lost, that’s why such satanism”, added the scientist.