At the boundary of the Earth’s core and mantle, giant oxygen reservoirs 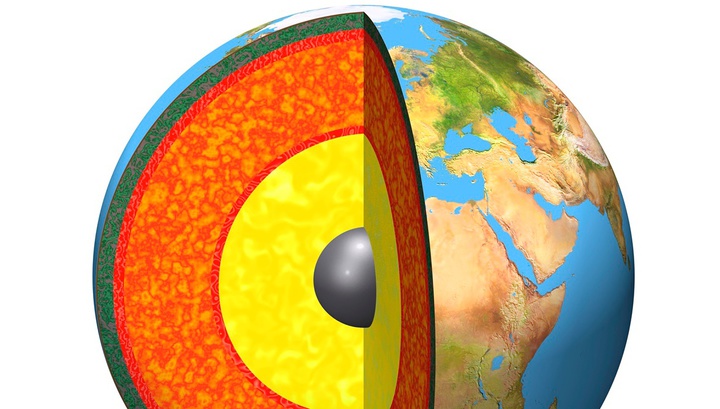 A team of researchers led by Ho-Kwang Mao of the Carnegie Institution in the United States seems to have uncovered a mystery that has long been of concern to geologists. The authors explained from which mineral the zones of slowing down seismic waves on the boundary of the core and mantle consist and reproduced the process of its formation in the laboratory. If the conclusions of the scientists are correct, then such zones turn out to be giant storage of oxygen, which can influence the history of life on Earth. A scientific article with the results of the research was published in the journal Nature on 22 November 2017.

How do we know what’s under our feet? This simple question is a headache for geologists. Wells leading to the center of the Earth exist only in pages of fantastic books, but in reality the record depth of drilling barely exceeds 12 kilometers.

To help scientists come seismic waves. Differently propagating in rocks of different density, they allow us to conduct “ultrasound” of the bowels of our planet. However, the information that can be obtained by such a scan is incomplete. Often the answers obtained only give rise to new questions. Actually, as in any other field of science.

At a depth of 2,900 kilometers below the Earth’s surface lies the boundary of the core and mantle. Geologists have long discovered areas in which seismic waves move unusually slowly. They were called zones of ultralow speeds, in English ultralow velocity zones, hence the abbreviation UVZ. But what are they? What mysterious material so slows down the vibrations of the earth’s interior?

This issue has been discussed by scientists long ago, and many hypotheses have already been proposed. All of them, however, suffer from one drawback: it is required to explain how the required substance in general turned out to be at such a depth.

The Ho-Kwan team seems to have killed two birds with one stone. Researchers have found both a suitable mineral and a simple mechanism for its formation right on the spot. True, this success led to the question of whether there is any need to revise something in the history of the Earth’s biosphere.

The mineral, which was liked by the authors, is FeO2Hx iron peroxide (the number of hydrogen atoms can be different). Referring to the work of their predecessors, they say that it is stable in conditions of the lower mantle.

But where would he get it from? To answer this question, scientists recreated a small piece of infernal depths in the laboratory. Diamond grips squeezed the substance, creating a pressure of 860 thousand atmospheres. The laser beam, penetrating through the transparent diamond plates, heated the reagents to 1,900 degrees Celsius.

Under these conditions, as the authors have discovered, iron peroxide is formed from the simplest components: iron and water. Iron in the core of the Earth as much as necessary – in fact, of this metal, it basically consists. And the water? According to the authors, annually 300 million tons of water descends into the depths of the mantle due to the movement of tectonic plates. According to their calculations, a tenth of the water of the World Ocean would be enough to create all the observed UVZ. For comparison: according to some estimates, there are 90 times more water in the bowels of the Earth, including the bark, mantle and core, than on the surface.

It turns out that the necessary mineral is formed on the boundary of the mantle and the core of substances that are there enough. But is it really responsible for the picture that is observed on the seismograms?

The researchers also checked this. Using experiments and theoretical calculations, they found that the required characteristics (sound speed, density, etc.) have a mixture in which 40-50% is iron peroxide, and the rest is in ordinary rocks of the lower mantle. The properties of such a mixture are in excellent agreement with observational data on UVZ. It seems that the secret of the mysterious “slowdown zones” is still uncovered.

But this discovery raises other exciting questions. As explained in the research press release, iron peroxide deposits are a giant oxygen reservoir. From time to time, oxygen can be released and reach the surface. The consequences of such events and their possible connection with climate change, mass extinctions and other grandiose events are still to be studied.