At the LHC, they may have received an elusive quasiparticle 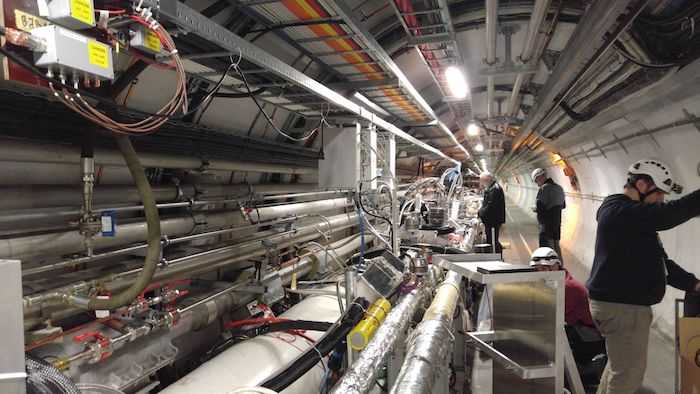 The close passage of protons in the TOTEM experimental setup gave rise to an odd number of gluons, which can be explained by the presence of a particle predicted in the 1970s – odderon.

The team of specialists in high-energy physics found in the results of experiments at the Large Hadron Collider (LHC) possible evidence of the existence of odderon – a subatomic quasiparticle, predicted in the early seventies. Two articles with the proof of the existence of odderon are published in the reprints of arXiv preprints and in the CERN library and are being prepared for publication in peer-reviewed journals.

In a tunnel with a circumference of 26.7 on the territory of Switzerland and France, physicists accelerate to velocities close to the speed of light and push the hadrons-elementary particles, some of whose types consist, among other things, protons and neutrons. In their collisions, other particles are born and instantaneously cease to exist. Investigating the behavior of these short-lived particles and the nature of their movement, physicists are increasingly learning about the nature of matter. Experiments at the LHC allowed in 2012 to prove the existence of the Higgs boson.

Sometimes the colliding hadrons-in this case the protons-are exchanged by gluons-the particles with which the main constituents of the protons, the quarks, are fastened together. “Interaction of protons is similar to the collision of truck-trucks: after the accident we will find next to each other car transporters, but the cars they were carrying will be scattered everywhere and will not be inside the car carriers,” explains Timothy Raben, a physicist- theorist from the University of Kansas and one of the authors of the work. In addition, since we are trying to talk about the quantum world, new cars are emerging from nowhere: the collision energy takes the form of new particles.

There are seven experimental installations at the LHC. On one of them, TOTEM-e, study the events occurring at close spans without collisions: the protons remain unharmed, but slightly change their energy, and sometimes also exchange gluons. Until now, on TOTEM-e scientists have observed an even number of gluons. This time the number of gluons turned out to be odd.

The electronic signatures of the particles released in the collision can not be explained by calculations involving an even number of gluons: each proton should have three, five, seven or more. An odd number of gluons can be explained by the action of odderons. The existence of the odderon does not contradict the Standard Model and is confirmed by theoretical calculations, but has not yet been confirmed experimentally. To obtain an odd number of gluons (and, possibly, odderons) was possible thanks to the huge collision energy – 13 teV, first achieved only two years ago.