Attributed to the unique features of the web 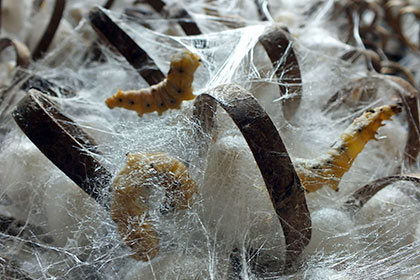 The biologists from the Institute of physical and chemical research RIKEN have shown that the amino acid sequence of the protein fibronol play a crucial role in determining the properties of the silk fibres. The study is published in the journal Scientific Reports.

Silk fibers consist of large protein fibronol, which is a long, elongated molecules that are synthesized in the glands of arachnids and larvae of silkworm butterflies. The fiber structure consists of modules formed by repetitive amino acid sequences. However, scientists did not know for sure whether these modules are the main determinants of the properties of silk, or the basic role of the process of spinning.

The researchers compared the silk obtained from a variety of silkworms, mulberry not only domesticated, but many species of wild butterflies. Genes encoding fibroin, evolved over hundreds of millions of years and different groups of silkworms have developed their strategies for the production of silk fibers.

Samples of silk were subjected to a battery of tests to determine physical characteristics material: heat treatment, stretching, and the study of crystal elements, silk fibers using synchrotron radiation. It turned out that different amino acid modules define the properties of the fibers under tension. In one case, they contribute to a soft and gradual structural changes in the other — sharp and consistent. The latter were similar to the wild species of silkworms. In addition, the length of amino acid sequence affect the resistance of a material.