Aurora and its lake reflection 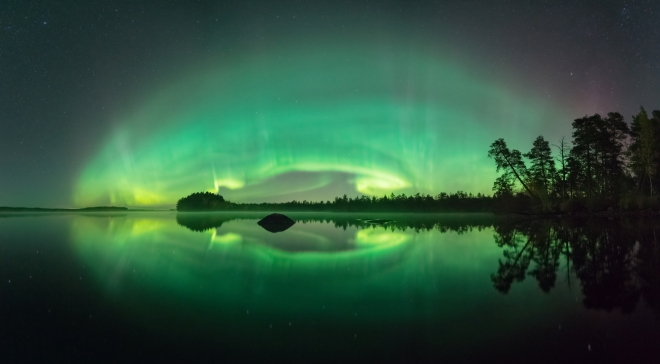 On Sunday, October 7, the flow of solar wind reached the magnetic field of the Earth, causing geomagnetic storms of class G1, which lasted more than nine hours.

The result of the interaction of charged particles with the magnetosphere has become a magnificent aurora. Matti Helin watched the light show standing up to the waist in water in an arctic Finnish lake.

“The geomagnetic storm came, as predicted. The first shining bands appeared about an hour after sunset. Later I went to the lake away from the city lights. When the auroras began to grow brighter, I went into the lake and waited. After about 45 minutes, green lights appeared. It was fabulously beautiful! ”Said Helin.

Shining formed an arch, which stretched over the motionless surface of the reservoir and reflected in it, creating an amazing picture.