Australia and Canada were one 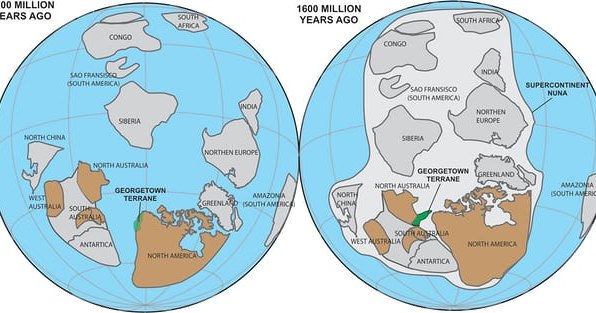 Australian geologists have proved that 1.7 billion years ago part of the Australian continent was one with modern North America.

The zircon mineral found near the city of Georgetown in north-eastern Australia turned out to be most similar to zircon from the Laurentian plateau (the Canadian Shield), a geological formation now forming the northeast of Canada with the Great Lakes. The age of the deposits in which the mineral was found is 1.7 billion years old; at that time the territory of modern Canada and part of Australia were a single land massif, scientists write in an article published in the journal Geology.

The fact that part of Australia used to be a single whole with the northern part of North America was suspected in the 1970s: it was then proven that 1.13 billion years ago they were part of the Rodinia supercontinent. However, the exact mutual location of the continents remained unknown during this period.

Australian zircons speak of an even more ancient neighborhood of modern Canada and northern Australia: apparently, they were part of the supercontinent Columbia, presumably existed in the period from 1.8 to 1.5 billion years ago. The zircons found near Georgetown formed at the bottom of a shallow sea, which ceased to exist when the continents split, and part of North America collided with the Australian region of Mount Isa, forming modern Australia.

Since then, the continents have converged many times into one supercontinent and diverged; The last supercontinent, Pangea, ceased to exist about 175 million years ago.