Australia has opened a new species of a dinosaur 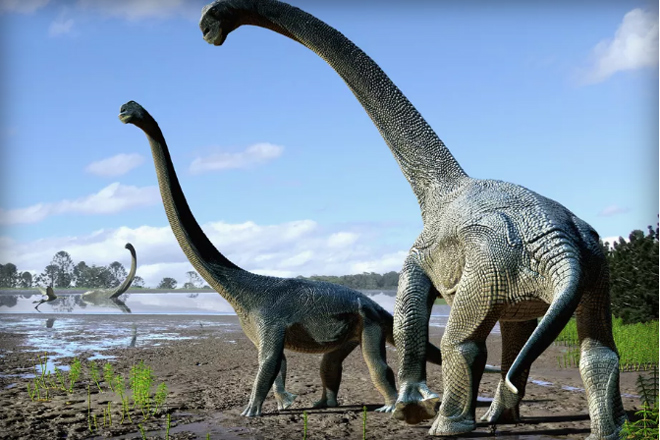 Paleontologists opened a new type of a dinosaur in Australia. The ancient herbivorous reptile had widely placed coxofemoral joints, a long neck, four legs. The dinosaur was of the size of a half of the basketball platform, and his shoulders would reach a basketball ring. Fossilized remains of a dinosaur in Australia — a big rarity. Opening will help scientists to understand how these huge creations extended on the planet millions years ago.

David Elliot came across fossils accidentally in 2005. It grazed sheep in the northern Australian city of Uinton when found what at first counted as fossilized extremities. When his wife Judee Elliott compared two fossils, couple understood that bones were a toe of a huge herbivorous dinosaur. The research of other skeleton showed that it was absolutely new type from group of herbivorous dinosaurs — zauropod.

Today, more than 10 years of work later, the team of scientists under the leadership of the Australian paleontologist Stephen Poropat called a new type саванназавр эллиотторум (Savannasaurus elliottorum) in honor of a family Elliotov and the grassy region where discovery was made.

Skeleton of a savannozavr — one of the most complete skeletons of zauropod which were found in Australia. Savannozavr reached about 15 meters in length and weighed 18 tons as three African elephants. The reptile had a long neck and a wide round body.

Researchers didn’t find any fossilized sample of a dung or teeth to determine that ate саваннозавр. But, most likely, the dinosaur grew to such size on a vegetarian diet. It is possible therefore the dinosaur was such wide in the middle of a trunk: it needed really long intestines to extract nutrients from fibrous food.

Savannozavra lived in Australia near other two other types of titanosaurs, at the very end of the Cretaceous 95-98 million years ago.

We don’t know how dinosaurs got to Australia, but during this time period the Green continent was connected to South America by means of Antarctica. As in Australia there are no bones of a zauropod 105 million years are more senior, authors of a research assume that dinosaurs came from South America through Antarctica here during warming.

It is possible that zauropoda lived also before in Australia, their bones just didn’t remain.