Bacteria of enterococci were older than dinosaurs

Enterococci – a bacterium whose most important quality is the high resistance to antibiotics, originated from a common ancestor that lived about 450 million years ago. At that time, multicellular life made its first steps in hard ground. The most advanced of its representatives are primitive amphibians: before the era of the dinosaurs it was still very far away. This team of authors wrote in the online version of the journal Cell.

Today, the resistance of pathogens to antibiotics is one of the leading health problems in the world. Some microbes, often called “super bacteria”, are resistant to virtually all antibiotics. Researchers around the world are looking for solutions to this problem, and understanding the origin and evolution of resistance to antibiotics will help them in their search.

“Analyzing the genomes and behavior of modern enterococci, we were able to” translate the clock “back to the time of the first of them and put together a picture of how these organisms were formed into what they are today,” says Ashlee M. Earl ), The leader of the MIT bacterial genetics group and Harvard.-Understanding how the environment in which microbes live leads to the emergence of new properties can help us predict how bacteria adapt to the use of antibiotics, disinfectants and other products, They are intended to control their distribution. ” 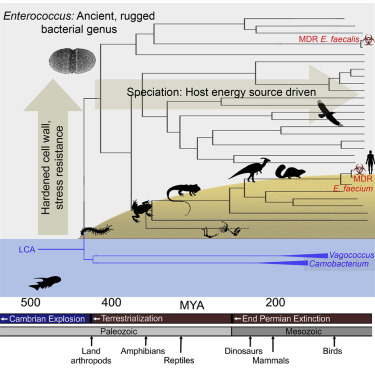 Speciation of enterococci in time. Fig. From the article under discussion

The authors of the study found that all known types of enterococci, including those that have never been found in health care facilities, are naturally resistant to dryness, hunger, disinfectants and many antibiotics. Since enterococci live in the intestine of most (if not all) terrestrial animals, it seems likely that they also were in the intestines of extinct terrestrial animals, from the most ancient ones. Comparison of the genomes of enterococci has shown that this is indeed the case. The research team found that new species of enterococcus appear whenever new species of multicellular animals appear. This applies to the exit of animals to land, and to mass extinction, which provoked the appearance of new species.

Bacteria that live in the digestive tract of marine life like fish are taken out, and are most likely absorbed by other animals along with water or bottom sediments. On land, everything is different: the intestinal microflora comes out with faeces that are likely to dry out without waiting for the heaters. Apparently, the appearance of enterococci and was an evolutionary response to the changed habitat conditions. Extraordinarily hardy microbe, able to withstand adversities, today causes hostility among doctors.

“Now we know which genes were obtained by enterococci hundreds of millions of years ago when they became resistant to drying, as well as disinfectants and antibiotics,” said study leader Michael S. Gilmore.

“Now they are the targets of our research into the development of new types of antibiotics and disinfectants that specifically eliminate enterococci as a threat to hospitalized patients,” adds his co-author François Lebreton.