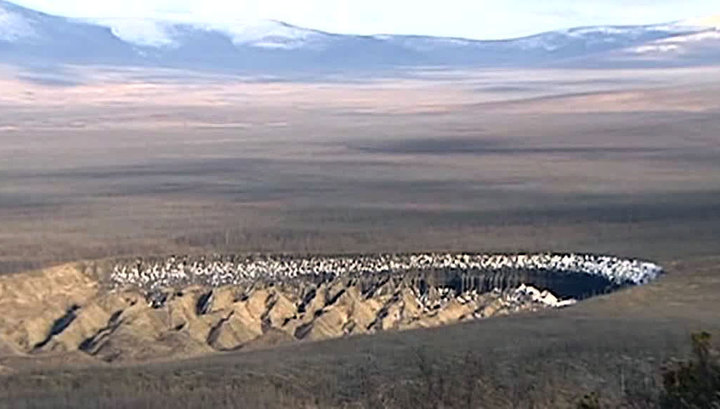 In Yakutia, scientists returned from a trip in a giant thermokarst basin in the Verkhoyansk ulus. The famous failure of up to a kilometer in length, and its depth in some places is about 100 meters. Inside, the expedition found remains of plants, whose age is hundreds of thousands of years, a layer of ice may be older than the ancient ice of Antarctica.

Huge failure lost among the taiga and mountain ranges in polar Yakutia. Ecologist Vitaly Mironov — one of the witnesses to the formation of the object that so interested the scientific world. The first serious changes in local relief specialists found in the middle of 60-ies.

“I first visited the place 42 years ago — here was a narrow deep ravine 20 meters deep and the same width,” he recalls.

Batareika — fault bears the same name of a mountain stream. And seven miles is the district center is the village of Batagay. This fact points to human-induced cause of depression. During the war it was mined tin. For the needs of the mine were cut down surrounding forests. The result is a depression a mile long and a width of 800 meters.

The average excavation depth is 60 meters. Sometimes this figure can reach 100 meters. The feeling here is, of course, is fantastic — particularly impressive is the panorama from the South-West side of Betawiki.

Unusual here and the remains of ancient animals. In this case a bone of a mammoth. But, as explained to us by local people, for local places, it is a quite common picture.

The first expedition of scientists on BetaGauge has already produced results. British Professor Julian Murton found in the burrow of a gopher remains of the tree, which has hundreds of thousands of years.

“We found two layers of soil, where the remains of vegetation. And, of course, was both surprising and exciting to know that we can date the samples found in the lowest horizon, 200 thousand years,” the scientist said.

And the age of the ice layers in the fault, and all can reach a million years is twice as old as the ancient ice of Antarctica. This version was expressed by scientists at the Yakutsk permafrost Institute. Professionals will also have to examine the rate of melting of the lens Verkhoyansk failure.

“Basin warns us of the consequences of environmental violations, on the one hand, and on the other hand, these outcrops give us new knowledge about the history of the earth” — explains the Director of the Institute of applied ecology of the North North-Eastern Federal University Grigory Savvinov.

Batagayskogo the rift today is one of the largest in the world. Its dimensions are 3.5 times higher than similar failures in Canada and Siberia. Studies show that such pits may appear in other areas verkhoyanya.

“Every year the expansion comes with 10 to 15 meters. As we can see, the lens of ice in the direction of the South decreases. And this side is gradually “heal”, — says the head of the Verkhoyansk protection inspection of nature Ilya Popov.

Batagama scientists have called one of the main objects of Russia and the world for the study of permafrost. Starting this year, in addition to researchers interested in the rift and the tourists. In the future, a giant hollow can obtain the status of a popular tourist route.