Beef can become deadly because of superbugs 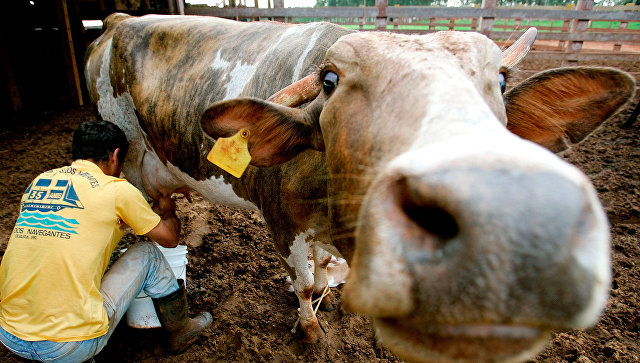 The first source of dangerous and invulnerable superbugs capable of causing epidemics among people may be beef and other types of meat grown on farms using antibiotics. This is written by biologists in an article published in the journal Scientific Reports.

“The presence of bacilli that can produce enterotoxins in many samples of beef and chicken from Egypt suggests that these microbes can become a serious threat to public health.” The continued use of antibiotics can cause these bacteria to “transfer” this ability to other, more dangerous microbes, ” – write Kamelia Osman (Kamelia Osman) from the University of Cairo (Egypt) and her colleagues.

In recent years, the problem of the emergence of so-called “super bacteria” – microbes resistant to the action of one or more antibiotics – has become more and more acute for physicians. Among them there are both rare pathogens of infections, and very common and dangerous pathogens, such as Staphylococcus aureus or pneumococcus pneumoniae. There was a real danger that all antibiotics will lose their effectiveness and medicine will return to the “dark ages”.

The main “incubators” of such microbes, according to scientists, have recently become livestock farms, where antibiotics are used to accelerate the growth of meat breeds of livestock. Both on farms and in hospitals, large numbers and potential carriers of infection are concentrated, and the bacteria themselves, and antibiotics that cause them to evolve and do not allow “ordinary” bacteria to crowd out less prolific supermicrobs.

In recent years, as Osman notes, virtually all countries in the world are constantly scandals associated with the import or production of beef or other types of meat that contain large quantities of dangerous pathogens.

Such reports in the media prompted scientists to conduct their own quality control of meat. To do this, they visited one of the markets in Cairo, bought 250 pieces of beef and chicken, both local and foreign, and studied their “microflora” in the laboratory.

As it turned out, in about half of them there were large numbers of microbes from the genus of bacilli. At the same time, one third of them contained spores or active cells of a microbial of the species Bacillus cereus, one of the causative agents of acute diarrhea and other infections of the gastrointestinal tract. Unlike other microbes, it is extremely difficult to destroy them during cooking, because their spores can withstand a temperature of 100 degrees, and toxins do not decompose from heat.

Other pieces of meat contained the types of bacilli that are commonly found in soil, water and other natural environments and do not bind to various infections. Scientists have checked whether they can harm a person by analyzing which genes associated with the production of toxins are present in their DNA.

As it turned out, more than half of the microbes were carriers of the cytK gene, one of the main “fighting poisons” of Bacillus cereus, and about 30-40% of them could produce other dangerous to humans toxins – nhe, hbl, entFM and other dangerous bacterial proteins.

Many of these microbes, more than half of their total number, were resistant to the action of penicillin and many other antibiotics, which are now used in both clinics and farms. On the other hand, “antibiotics of the last hope”, such as vancomycin and chloramphenicol, still kill almost all of these bacilli – only 3% of microbes managed to develop “immunity” to these drugs.

Interestingly, both these unusual features of “meat” bacilli originated independently of each other. This, according to Osman and her colleagues, says that the most dangerous versions of such microbes have not yet appeared. They may occur in the coming years if antibiotics continue to be used in large quantities, and farms will not comply with basic health standards that prevent the penetration of microbes into meat.