Biologists have created a non-existent bacterium 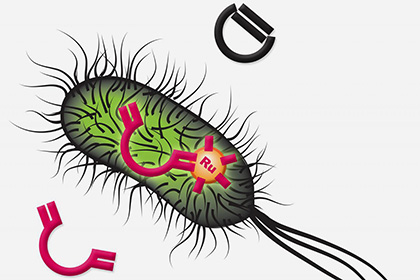 Swiss biologists from the University of Basel and ETH Zurich have created bacteria inside of which operates an artificial enzyme, which have no natural counterpart. This protein, containing metal atoms, able to catalyze industrial chemical reactions within a living cell. The results of the research of scientists published in the journal Nature.

Metallothermic called biot-EN-SAV was created using Biotin-streptavidin technology. This method is based on the high affinity of protein streptavidin to the vitamin Biotin. Various compounds bound to the Biotin, thus, can be introduced into a protein to create artificial enzymes. In this case, the researchers used ORGANOMETALLIC substance, that was based on the ruthenium.

ORGANOMETALLIC compounds are molecules having at least one bond between the metal and the carbon atom. They are often used as catalysts in industrial chemical reactions, however, does not operate in aqueous solutions or environments resembling in its composition the content of biological cells. To solve this problem, they are incorporated into protein molecules.

biot-EN-SAV catalyzes metathesis of olefins, the reaction between the two elkanemi that exchange groups of atoms located at double bonds. The result is a fluorescent molecule.

Scientists have placed an artificial enzyme periplasm E. coli (Escherichia coli) — space between cytoplasmic and outer membrane of bacterial cells is present only in gram-negative microorganisms). Environment periplasm much better suited for the implementation of metathesis olefins, as it contains low concentrations of inhibitors of metalloenzymes such as glutathione.

The researchers optimized the biot-EN-SAV using the principles of directed evolution. They imitated the process of natural selection, to obtain enzymes with improved properties. To do this, scientists have created thousands of versions of metallothermic and selected the most effective of them. After a few cycles, the catalytic performance biot-EN-SAV markedly improved.