Biologists have discovered a fungus that turns insects into “zombies” 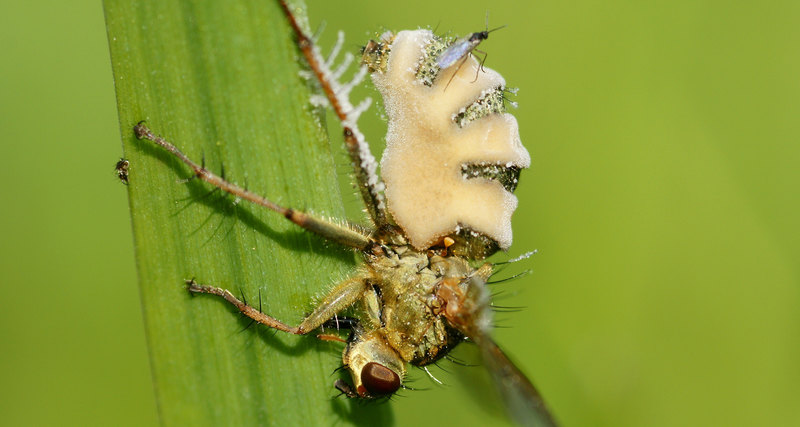 Biologists from California have discovered an unusual fungus that penetrates the brain of fruitfly flies and turns them into obedient zombies that spread it among healthy insects.

“There are several microbes, fungi and protozoa that can control the behavior of multicellular animals. We still do not understand how they “break” the nervous system of the victims, and opening a fungus infecting the fruit fly gives us a chance to reveal this secret, “says Carolyn Elya of the University of California, Berkeley, USA.

In recent years, biologists have discovered dozens of examples that parasites can directly control the behavior of the host. For example, the virus LdMNPV can make caterpillars of silkworms climb up trees and turn into a “virus bomb”, and the larvae of flies-humpbacks cause bees to escape from the hive. The cat’s parasite of toxoplasma can “reprogram” the memory of a person and mice, making the former susceptible to suicide, and the second – fearless.

The most “advanced” and interesting example of such parasites are still fungi of the genus Ophiocordyceps, affecting ants living in the tropical forests of South and Central America. When this “zombie” fungus penetrates the victim’s body, it radically changes its behavior, causing the ant to attach to branches and leaves of trees over an anthill and over the paths along which its relatives go to search for food in the forest.

Elia and her colleagues actually accidentally discovered another example of such an “invisible puppeteer”, which affects not the ants, but fruit flies-drosophila-analogues of laboratory mice among insects.

In the summer of 2015, as the biologist says, she left half a spoiled watermelon on the balcony of the apartment, hoping to attract new fruit flies and collect larvae for experiments in her laboratory.

After a while, the flies really began to multiply in the rotting pulp of watermelon, however some of the adult insects, as Elia remarked casually, behaved in a very strange way. They circled the balcony, gradually rising to its ceiling. Having reached it, the flies froze, pulled out their proboscis, attached them to the wall, lifted their wings unnaturally and died.

Having collected several dead bodies of flies, Elya analyzed their contents and discovered on their surface a large number of spores of the parasitic fungus Entomophthora muscae, which scientists have long considered as one of the means to combat meat and common flies.

The discovery of the controversy of this fungus caused her to assume that the strange behavior of the flies and the spores of Entomophthora muscae may be related. She tested this theory by trying to infect laboratory Drosophila with this fungus, whose name in Latin translates as “killer insects.”

Initially, the biologists did not succeed – the fungus persistently “hid” from them and did not want to reproduce in “greenhouse” conditions. Later, scientists found that the standardized food for Drosophila contains antibiotics that kill fungi, which is why the spores of “insect killers” did not get accustomed.

When scientists transferred the fruit fly to “organic food”, the fungus quickly penetrated into their body, first of all, infecting the largest nerve nodes of insects. Parallel to this, the threads of his mycelium penetrated into the fat stores of flies and began to “pump out” energy from them.

While Drosophila remained fat, E. muscae did not manifest itself and did not affect the behavior of insects. The situation changed dramatically after the depletion of its stocks – the threads of the “insect killer” began to germinate in all the organs of the fly and took control of her brain, causing the doomed creature to climb up.

Only after his victim was attached to the ceiling, the fungus killed her, “eaten” her brain and muscles, and began to scatter spores. Similarly, like his distant cousin Ophiocordyceps, he provided the maximum “radius of damage”, infecting the remaining flies and larvae living next to his prey.

In turn, the discovery of the zombie-hulk, which affects the well-studied fruit fly, will help scientists maximize our chances of revealing the secrets of how these “behind-the-scenes puppeteers” manipulate the behavior of the victims, distinguish them from “incompatible” insects and find out what is happening in environment.