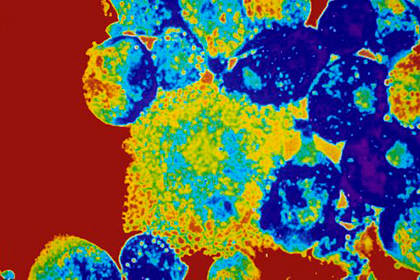 Molecular biologists at Purdue University have determined the structure of fuscovenosa — new group of viruses that have two protective shells surrounding their DNA. Until now, there have been known viruses, having only one external protein shell — the capsid. A study published in the journal Proceedings of the National Academy of Sciences.

Fuscovenosa were giant viruses infecting amoebae and species Vermamoeba verformis. They have a dual chain of DNA, consisting of 466 thousand nucleotide pairs and encodes a protein of 451. Two-thirds of this amount have no analogs in other viruses. After hitting fuscovenosa in the body of the amoeba, they form viral factories, where they reproduce hundreds of copies, after which the amoeba cell during the day is destroyed.

Using cryoelectron microscopy, scientists were able to unravel the protein structure of giant viruses, as well as to identify the portion of DNA that encodes the main capsid protein. It turned out that the outer shell is formed of fuscovenosa protein, consisting of two wrapped layers of the roll. The similar structure of outer shells can be found in other viruses with dual DNA.

On the other hand, the inner shell, according to scientists, is something unusual. Proteins, of which it is composed, are absent in all other known viruses. In addition to the unique architecture of the body that helps to survive under unfavorable conditions, the virus has a complex genome. Those stretches of DNA that encode the envelope proteins capable of altering the frame readout of genetic information, producing new proteins. This ability helps the virus to adapt to a changing environment.

Reading frame is any one of the three possible DNA sequences capable of encoding a protein. As for each amino acid of the protein is responsible for the combination of three successive nucleotides, shifting the frames one or two nucleotide changes the combination and can encode a different amino acid.