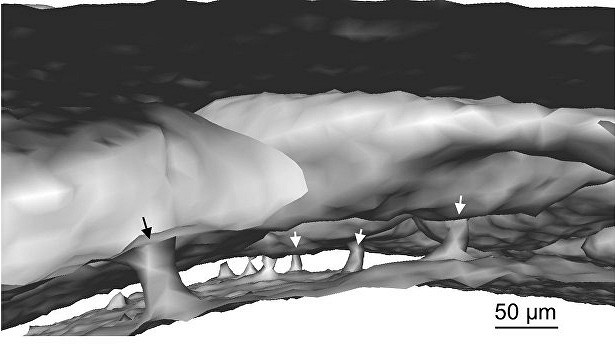 Biologists from Harvard have discovered unusual channels that connect the bone marrow in the thickness of the skull to the brain tissues, which can explain how immune cells enter into it when inflammation develops.

“We plan to study how these channels influence the development of Alzheimer’s disease, strokes, hypertension and other ailments associated with inflammatory processes, and they can be used to directly deliver drugs to the brain,” notes Mathias Nahrendorf of Harvard University (USA).

Our brain is isolated from the rest of the body by the so-called hemoencephalic barrier (GEB) – a dense layer of special cells, astrocytes, surrounding all the blood vessels of the brain and not allowing anything inside it except oxygen and nutrients.

As scientists explain, this barrier is not a monolithic wall, but a set of unique cells-“bricks”, between which there are small channels, so-called tight contacts. Recently, biologists have discovered that these contacts can expand under certain conditions and help the brain cleanse itself of “garbage”.

Narendorf and his colleagues accidentally discovered another possible “backdoor” for the penetration of infections or immune cells into the human brain, studying how mice immunity responded to various forms of strokes caused by a surgical or chemical route.

His team, as the biologist notes, was interested in where the bull comes from, the first to respond to vascular damage and bleeding into the brain. To answer this question, they injected into different parts of the bone marrow, where neutrophils, immune cells of “rapid reaction”, a special dye that made them shine with different colors, are formed and traced their migrations.

To Narendorf’s great surprise, not the immune bodies that were formed in the tibia, the main “factory” of such cells, but their “cousins” that appeared inside the skull bones, were the first to enter the damaged vessels of the brain of mice.

“Service entrance” of the brain

Something like this was previously considered impossible, since biologists believed that cells that originate inside the skull are not able to seep through the BBB and enter the brain. Trying to understand how this happened, the authors of the article studied in detail the structure of the boundary between the skull and its entrails.

“We examined the bones of the skull from all possible angles, trying to understand how neutrophils could penetrate the brain.” Unexpectedly, we found a multitude of microscopic channels that directly connected the bone and brain, “continues Narendorf.

Further observations of these channels showed that the cells move through them only in those cases when an infection appears in the brain or its vessels are damaged during strokes. In other cases, neutrophils penetrate not into the brain, but into the vessels that feed the bones of the skull, and spread to all other corners of the body.

Similar structures, which are approximately five times larger, are also present in the human skull. They, as scientists suppose, can pass not only neutrophils, but also other types of cells that have yet to be discovered and studied.

Observations of them, as Harvard biologists hope, will help us understand how different inflammations in the brain arise and how they can be associated with neurodegenerative and autoimmune diseases.