Biologists have found animals that like to breathe carbon dioxide 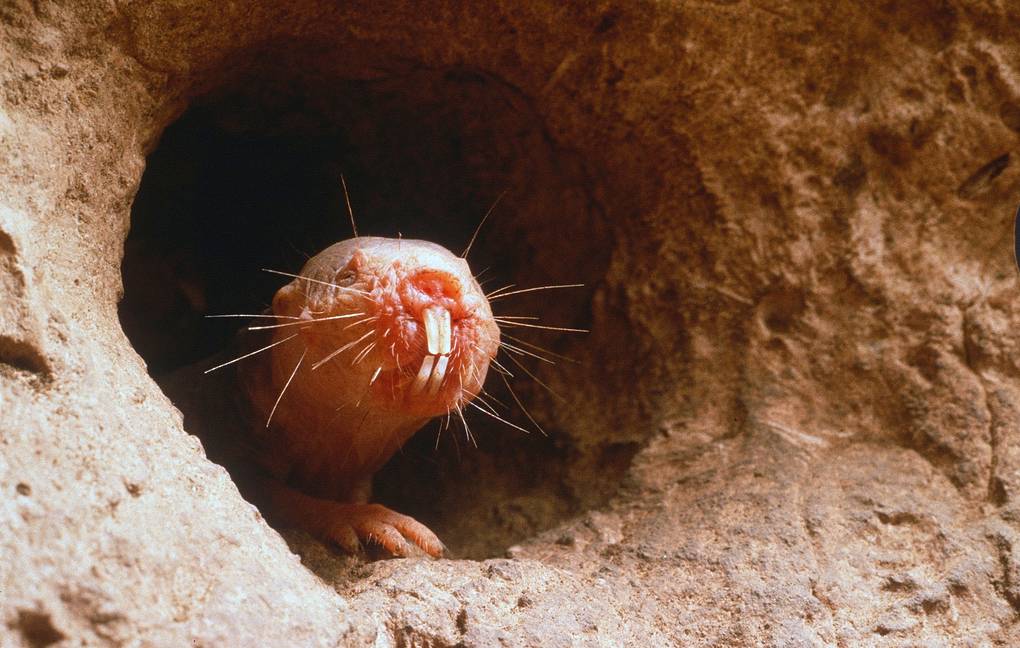 American biologists have found that “immortal” naked mole rats not only can live without oxygen for a long time, moreover: they need a high level of CO2 in the air. The fact is that in the opposite case, they constantly have seizures. The scientists published a description of the results in the current scientific journal Current Biology.

“There are no mechanisms in the brains of naked mole rats that are responsible for the inhibition of neurons in other mammals. Instead, they use carbon dioxide. In other words, they coped with this problem by literally digging out a new ecological niche in which other animals cannot live.” , – commented a biologist at City University of New York, Michael Zions.

Naked mole rats (Heterocephalus glaber) are hairless underground rodents the size of a mouse and weighing 30-50 g. They live in East Africa in large colonies that, by the principles of the device, are similar to colonies of termites or other collective insects.

Half a century ago, biologists noticed that these creatures live ten times longer than the values ​​that are characteristic of mammals of comparable sizes, and also almost never suffer from cancer. Relatively recently, scientists found that naked mole rats practically do not feel pain and can live for more than 20 minutes without oxygen, and their skin does not respond to many caustic substances.

Trying to understand why naked mole rats often have seizures if the temperature in their “hive” reaches high values, Zions and his colleagues discovered yet another amazing feature of these strange rodents. Most mammals cope with similar problems, starting to breathe more often, but excavators do not.

Moreover, when scientists tried to suppress these attacks with diazepam, it was not what they expected to see. After taking this drug, the strength of the seizures increased, but did not fall, and seizures began to occur at normal air temperature inside the colonies of these rodents.

“Brake pedal” for the brain

Trying to understand how naked mole rats in this respect differ from other animals, biologists studied how the genes of Heterocephalus glaber, which are responsible for the transmission of signals between nerve cells, are arranged.

This analysis unexpectedly showed that all naked mole rats are carriers of a rare mutation in the KCC2 gene. It is associated with the development of severe forms of epilepsy and autism. This gene is responsible for pumping out chlorine ions from neurons that inhibit brain activity. Damage to KCC2 leads to the fact that the efficiency of this process is sharply reduced, therefore, carriers of such “typos” in KCC2 are heavily susceptible to various forms of seizures.

Having discovered this unusual feature of the digger’s genome, biologists wondered why mutations in KCC2 do not cause seizures in normal living conditions. To answer this question, scientists turned for help to medical colleagues who study seizures.

They suggested that the reason for this was that the air in the colonies of the diggers contained a lot of carbon dioxide. This substance, as shown by observations of the activity of exciting neurons, inhibits their activity. This can help diggers keep their nervous system in balance.

Scientists tested this hypothesis by observing how the behavior of naked mole rats changed with dramatic changes in the amount of CO2 in different corners of their colonies. These experiments showed that rodents preferred to live where there was the highest level of carbon dioxide and avoided those corners where the air was the cleanest.

These two unusual physiological features of the Heterocephalus glaber, as scientists suggest, allowed their ancestors to switch to a “collectivist” way of life inside tight underground colonies. This is supported by the fact that there is a similar mutation in the KCC2 gene in the genome of Damara peskoroevs (Fukomys damarensis), the second mammalian species that resembles ants and termites in this respect.