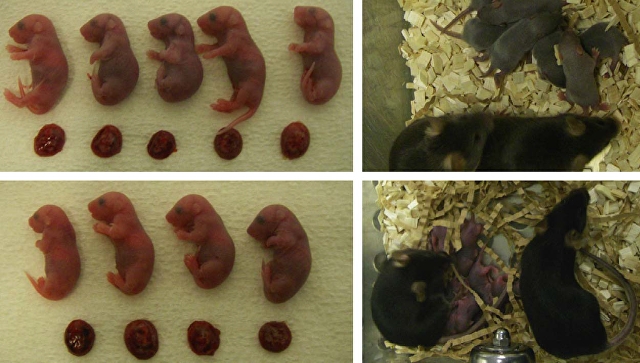 Molecular biologists from Britain for the first time a fully developed fetus, bypassing the phase of fertilization and its junction with the sperm that will simplify the process of cloning in the future, according to a paper published in the journal Nature Communications.

Our work casts doubt on the nearly 150-year-old dogma that only fertilization of an egg by a sperm leads to the formation of a complete embryo and birth of healthy offspring. We believed that only the egg can reprogram the sperm so began the normal development of an embryo, said Tony Perry (Tony Perry) from the University of Bath (UK).

Some living creatures, for example lizards, chickens, fish and many insects are capable of parthenogenesis – pregnant, in which two eggs are fused together, forming the embryo or female reproductive cell spontaneously begins to development, in spite of the incomplete set of chromosomes. For mammals, this method of reproduction is quite typical, and there is no one type of animal that would be able to do this even in theory.

As Perry says, trying to artificially induce parthenogenesis was conducted in the early 2000s, when scientists tried to trick the egg by chemical means and force her to start the program of development of the embryo, adding in a nutrient medium solution of chloride of strontium. It turned out that such a trick is feasible, however, such half-embryos, which scientists call parthenogenetic inevitably die after a few cycles of division.

For this reason, scientists believed that eggs have unique properties and mechanisms that allow them to start the process of birth of new life and merging the paternal and maternal halves of DNA, purging them from the so-called epigenetic marks and other procedures that are critical to the development of the embryo.

It turned out that it is not. Experimenting with such cells, the authors found that they can reprogram the sperm and even procurement of male germ cells, making them suitable for merging with the partial DNA parthenogenic and the continued development of a complete embryo. According to scientists, this process has been completed successfully and that led to the birth of healthy mice in 24% of cases, which is a very high chance of success in the procedure of cloning.
How to multiply aliens?

The mice born this way did not differ from the normal offspring of rodents and had a similar weight, size, intelligence, as often suffer from diseases which affect mice and was able to successfully reproduce, giving healthy offspring when crossed with each other or with ordinary individuals of the opposite sex.

Their only difference from natural mice was how often read their genes parthenogenesis, apparently, does not clear the epigenetic marks on the DNA received from the father, which changes the readability of some areas of their genome.

The success of this procedure, as noted by Perry and his colleagues, opens the way for creation of technologies of human self-fertilization, which are of interest to physicians for the reason that they allow you to get the clean lines of embryonic stem cells without the ethical problems associated with the destruction of viable embryos. In addition, parthenogenesis can faster help scientists to uncover genetic roots of rare diseases, making animal with a genome that consists of identical halves.